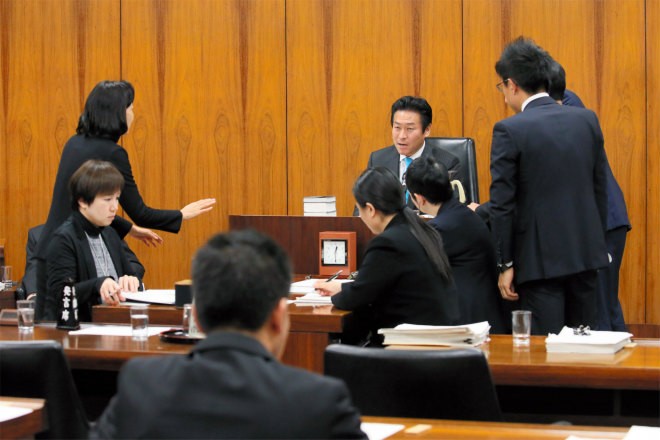 Lawmaker Tsukasa Akimoto, seated at back, cut off deliberations and forced a vote on a bill to lift a ban on casinos when he was chair of a Cabinet Committee on Dec. 2, 2016. (Asahi Shimbun file photo)

Opposition parties demanded an immediate investigation into the Abe administration’s responsibility for a casino-related bribery scandal following the arrest of a ruling party lawmaker who had railroaded legislation that legalized such gambling facilities.

Just hours after Tokyo prosecutors arrested Lower House member Tsukasa Akimoto on Dec. 25, Azumi asked his counterpart in the LDP, Hiroshi Moriyama, to hold a meeting of the Lower House Cabinet Committee by the end of the year to examine its deliberation process on the integrated resort projects bill.

Akimoto, who had presided over the deliberation process, is suspected of receiving bribes worth about 3.7 million yen ($33,820) from 500.com, a Chinese company that was looking for an investment opportunity in the casino business in Japan.

Moriyama on Dec. 26 informed Azumi of the LDP’s decision not to hold the session this year. The two agreed that some sort of meeting would be held before the second week of January, although Moriyama insisted on closed-door talks instead of a committee session.

Opposition parties were expected to establish their own headquarters on Dec. 26 to investigate the issue.

The CDP and other opposition parties also decided to submit a bill to the ordinary Diet session scheduled to convene in January to repeal the integrated resort projects law.

“This is an unprecedented situation,” Moriyama told reporters after his talks with Azumi on Dec. 25. “It is important to uphold the responsibility of the legislative branch of government.”

Opening casinos as part of integrated resort projects has been a pillar of the Abe administration’s regional development and economic revitalization plans.

But all opposition parties, with the exception of Nippon Ishin (Japan Innovation Party), remain united against the policy and the projects, citing potential problems with gambling addiction and corruption.

Akimoto was vice minister of the Cabinet Office from August 2017 to September 2019, and he oversaw issues related to integrated resort projects through October 2018.

He was also chairman of the Lower House Cabinet Committee in December 2016, when it discussed the legislation to lift the ban on casino operations in Japan.

Although opposition members of the committee criticized the bill, Akimoto cut off deliberations after only about five and a half hours and forced a vote.

The Diet passed the integrated resorts implementation bill in July 2018.

Akimoto is believed to have received the bribes from 500.com in return for providing favors in the company’s attempts to operate casinos in Japan.

He has denied the allegations to prosecutors, according to sources.

He also left the LDP following his arrest.

It was the first arrest of an incumbent Diet member since the second Abe administration started seven years ago.

The Tokyo District Public Prosecutors Office on Dec. 25 also arrested three officials connected to 500.com, a company based in Shenzhen, Guangdong province, that runs online casinos and other businesses.

Yuichiro Tamaki, head of the Democratic Party for the People, said Akimoto “deserves to resign as a Diet member.”

The reaction among members of the ruling coalition varied from suggestions that Akimoto was a lone wolf to fears for the future of the Abe administration.

“It is very unfortunate,” Nikai told reporters at the LDP’s headquarters after Akimoto’s arrest. “But Akimoto himself has strongly denied the allegations. I will keep a careful eye on the situation.”

Nikai also strongly denied that the scandal would have an impact on the Abe administration.

“The administration itself is not involved (in the scandal). That’s another question,” he said.

An LDP member who used to hold a Cabinet position agreed with Nikai, saying the scandal is “Akimoto’s personal problem.”

But such thinking may be short-lived.

By the night of Dec. 25, prosecutors had searched the office of another LDP Lower House member, Takaki Shirasuka, in Inzai, Chiba Prefecture.

Shirasuka accompanied Akimoto on a tour of 500.com’s headquarters in Shenzhen in December 2017, sources said.

Natsuo Yamaguchi, leader of junior coalition partner Komeito, said, “If (the incident) occurred while (Akimoto) was vice minister of the Cabinet Office, it simply cannot be justified and is unforgivable.”

Considering the opposition criticism against opening casinos in Japan, a middle-ranking LDP lawmaker said, “Those who are involved in the issue of integrated resort projects should have kept themselves ‘clean’ at all costs.”

Akimoto’s arrest is the latest in a long string of scandals that have hit the Abe administration. Most recently, his government has come under fire over bloated guest lists for taxpayer-funded cherry blossom viewing parties and the dismissal of a top ministry bureaucrat for leaking planned disciplinary measures against officials of the Japan Post group for shady tactics to sell insurance policies.

“We are in the last days of this administration,” a middle-ranking LDP lawmaker said.

(This article was written by Noboru Inoue and Junichi Bekku.)