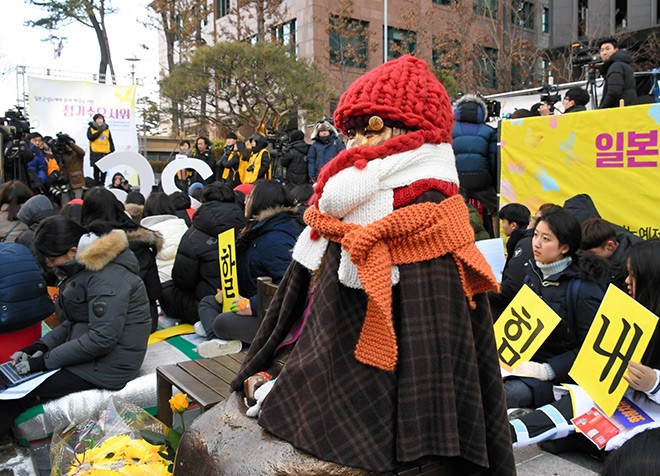 SEOUL--South Korea's Constitutional Court on Dec. 27 dismissed a lawsuit in which former "comfort women" argued that a 2015 agreement between Japan and South Korea violates the Constitution.

It offered no judgment on the constitutionality of the landmark accord aimed at putting to rest a thorny issue that had soured bilateral relations for decades.

The Japanese government had been following the case closely as it feared the administration headed by President Moon Jae-in might have felt the need to rescind the agreement and seek a new round of negotiations if the Constitutional Court ruled in favor of the plaintiffs.

Japan and South Korea reached the agreement in late 2015 in part to provide support measures to those who provided sex to wartime Japanese troops.

The suit was filed in 2016 by 29 former comfort women and 12 bereaved family members.

While the court ruled that the agreement did not infringe on the rights of the former comfort women to seek compensation from the Japanese government, it stopped short of handing down a decision on the constitutionality of the agreement itself.

The court ruled that it was difficult to consider the possibility of any violation of the plaintiffs' fundamental rights since the bilateral agreement contained no provisions that would have required the women to give up their right to seek compensation.

It did recognize, however, that the South Korean government did not make sufficient efforts to listen to the views of the former comfort women before reaching the agreement with Japan, which it accepted had led to the plaintiffs experiencing mental anguish.

The court went on to say that any assessment of the agreement should be left up to the political sector as such an evaluation went beyond what it would normally rule on.

(This article was written by Hajimu Takeda and Takuya Suzuki.)