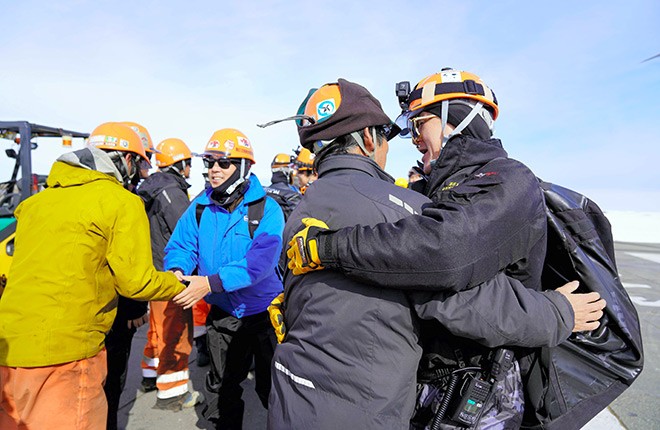 Members at the Syowa Station on Antarctica welcome the first contingent from the 61st Japanese research expedition on Dec. 30. (Yumi Nakayama)

SYOWA STATION, Antarctica--Soon after a helicopter of researchers took off from the frozen waters off Antarctica, a red-brownish patch of land became visible.

It was East Ongul Island, where Japan's Syowa Station base is located.

After a four-week voyage from Australia, the first contingent making up Japan's 61st research expedition to Antarctica arrived here by helicopter on Dec. 30.

Led by Shigeru Aoki, expedition members departed from the Shirase icebreaker for the helicopter hop to Syowa Station where they were greeted by members of the 60th expedition, who have spent more than a year at the station

Among the waiting members of the 60th expedition on hand to greet the latest expedition was Masaki Tsutsumi, the leader of the group. He shook hands with Aoki and Shusaku Takeuchi, the captain of the Shirase.

Tsutsumi and Aoki were in opposite roles 21 years ago. At that time, Aoki was a member of the 39th expedition, which was waiting at Syowa Station to welcome members of the 40th expedition that included Tsutsumi.

"This is our first meeting at Syowa Station in 21 years," Tsutsumi said about welcoming Aoki on Dec. 30.

Members of the newest expedition were instructed on the points they had to be careful about when conducting activities on the frozen continent. Meetings were also held to discuss transporting supplies, preparing for construction and passing on the status of various research projects.

The Shirase was anchored about 19 kilometers from Syowa Station. In the new year, it will use ice-breaking equipment to get closer to the station so fuel can be piped into the station.

Thirty-one members spent the winter at Syowa Station, but the coming summer will see a much larger population as the members of the 61st expedition and the Shirase crew will increase the population at the base to more than 100.