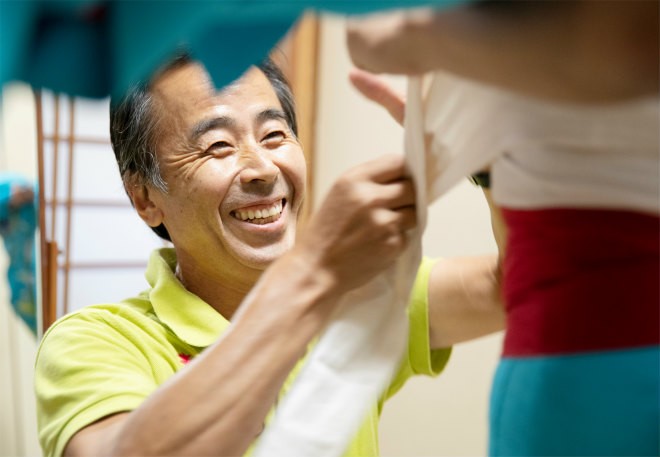 Kazunobu Kojima helps a “maiko” apprentice geisha put on kimono while enjoying a casual conversation with her in September in Kyoto. (Yoshiko Sato)

KYOTO--Kazunobu Kojima has perfected his skills as an “otokoshi,” the behind-the-scenes attendants whose main task is helping geisha and their apprentices prepare for performances.

The occupation in the female-dominated nightlife business may seem like an odd choice for a former ski instructor who says he doesn’t understand women.

But for more than 30 years, Kojima, 58, has been delicately dressing geisha and “maiko,” providing personal care and attending their rituals and ceremonies. He has gained so much of their trust that they give him keys to their homes and ask him for advice about their problems.

He is now training the next generation of his family in the craft.

One of only several otokoshi, Kojima is often seen breezing by on his bicycle in the Gion Kobu entertainment district here when evening is closing in.

In an interview with The Asahi Shimbun, the unpretentious Kojima explained the indispensable role he plays.

According to Kojima, the most important part of his work is visiting boarding houses where maiko live together to help them change into the “hikizuri” type of kimono before their appearances at parties and other nighttime events.

At one preparation session, Kojima’s eldest son, Toshihiro, 29, who started working as a trainee with his father half a year ago, applied much force when tying the untucked obi of a maiko.

The obi is nearly 7 meters long and is a symbol of the maidens.

Kojima did the same process with ease, and the cool expression on his face did not change in the slightest.

“A professional should not show that he is applying force,” Kojima said.

The traditional sashes must be fixed snugly to prevent them from coming loose during live dances, but tightening them excessively could constrict the performers’ movements.

In addition, different geisha want their obi to be tied at different degrees of strength.

Kojima need only four to five minutes to complete the process. He has memorized how obi should be fastened and adjusted for each of his clients based on their figures and preferences.

And he must move quickly from one place to another, often within minutes, because most of his clients need him in the evening.

Kojima was also an inspiration for a memorable scene in “Maiko wa Lady” (Lady Maiko), a 2014 musical film directed by Masayuki Suo that centers on a girl from outside Kyoto who dreams of becoming a maiko.

In the scene, an otokoshi played by Naoto Takenaka says otokoshi “do not simply help geisha and maiko don kimono.”

He displays many keys of geisha’s homes to a maiko candidate and states that otokoshi “must identify the keys just by touching them.”

He picks one key for the apartment of an independent geisha who lives alone. He enters the home to deliver a kimono to the resident, who is absent at the time.

When asked if such a scene could play out in real life, Kojima said ‘yes.’

“When I met with Suo, he spotted the keys I carried with me and asked, ‘What are they?’” Kojima said. “I gave an explanation, and he said it was interesting and that he would use the story in his film.”

Kojima has many small and large keys hanging from his belt. Their jingling sounds make people realize that he is coming near.

According to Kojima, geisha who perform at the famous Miyako Odori spring stage event in Gion Kobu use dressing rooms there to remove their costumes and change into other kimono for parties held at night. They have no time to return to their homes.

A tradition was established in which otokoshi are entrusted with house keys to bring the geisha’s personal belongings to where they live, Kojima explained.

Kojima said carrying the keys also enables otokoshi to enter geisha’s residences without ringing the bell to save as much time as possible during busy hours.

The custom underscores the fact that otokoshi can do their work only if they are entirely trusted by geisha and maiko.

Kojima grew up in Kyoto’s Miyagawacho entertainment district, which exposed him to the nightlife industry at an early age.

After graduating from high school, he worked at a company handling stage props for films and TV shows for four years, and then served as a part-time ski instructor for two years in Nagano Prefecture.

When he turned 25, Kojima became a trainee under his father, an otokoshi who worked mainly in Gion Kobu.

Although Kojima worked in Miyagawacho while under the tutelage of his father, his clients are now only in Gion Kobu, which has the largest population of geisha and maiko among Kyoto’s five traditional entertainment areas.

In Gion Kobu, otokoshi, in principle, are responsible for specific lodging of maiko. They continue serving them even if they become independent geisha.

He currently has 50 customers. Kojima, Toshihiro and another disciple assist in the dressing of nearly 30 geisha and maiko a day.

Kojima also attends the rituals in which a maiko exchanges cups of sake with a senior geisha to mark the start of their pseudo-sister relationship, a bond that continues until they retire from the nightlife business.

Kojima also wears formal “haori” kimono at traditional restaurants used as party sites to celebrate a maiko’s promotion to geisha and the retirement of a performer.

Although otokoshi are essential for major events in the careers of geisha and maiko, Kojima said it is “difficult” for him to work in the female-dominated community.

“I do not much understand the psyche of women,” he said. “At my former workplace, I could fix things just by quarreling when problems arise. But here, it is impossible to fight with those in their teens.”

Kojima often pays due consideration to the relationship between the performers, saying: “Geisha and maiko have various issues with each other. I believe such a thing is a feature of the world of women.”

One important thing that Kojima said has helped him as an otokoshi is his efforts to blur the gender line.

“My customers do not see me as a man in the same way,” he said.

In the short period they share with Kojima, maiko sometimes express their true feelings and problems in casual conversations.

“For example, they ask me what to do when they complain that a senior geisha says something but another geisha says a different thing,” Kojima said.

His answer is always the same: “Which one is your ‘sister’? What your sister said is correct.”

Maiko are nurtured by their sisters and the proprietresses of their boarding houses, and Kojima believes otokoshi should not do anything unnecessary other than telling them about the importance of abiding by rules in the community.

This philosophy also supports his belief that “otokoshi should work behind the scenes.”

Kojima calls himself “mikire,” a word used when something that should not be visible is shown in film or on TV.

“I work under the policy that we must be covered up,” he said. “Some recent TV shows depict behind-the-scenes activities, but I think there are things that should not be known for viewing pleasure. I believe such things should be concealed as they are.”

Kojima was asked what he thinks is most interesting part of working as an otokoshi.

“Maiko become geisha, and some geisha continue working while others retire,” he said. “I build relations with them, occasionally in just short periods, allowing me to appear in their life stories for a brief time.

“This creates the possibility that they will remember me in the future, saying, “There was such a guy back then.” That sounds nice to me.”