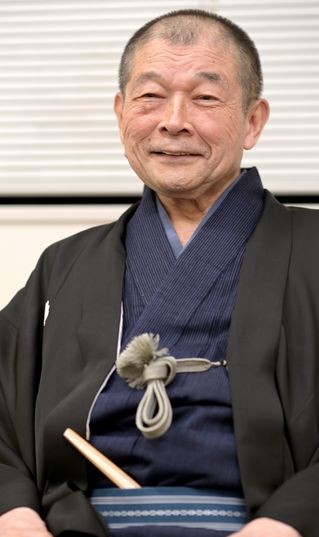 An author and poet working in both the Japanese and German languages, a "rakugo" comic storyteller and two scientists who made important discoveries about plants and reproductive cells are the recipients of this year's Asahi Prize.

In addition, The Asahi Shimbun presented a special award this year to photographer Takeyoshi Tanuma, 90, for his many contributions to photography.

Kosanji has been designated by the government as a living national treasure, but he explained that he never thought about gaining such praise when he entered the rakugo world.

Enjoying a career as a rakugo artist for a half-century, Kosanji takes pleasure now when he feels that the audience is "one" with his storytelling.

His advice for younger rakugo artists is "to live diligently as a human being," rather than seek a quick laugh during their performance. But age has not dampened his curiosity as Kosanji continues to enjoy his hobbies, from riding a motorcycle to photography.

In addition to writing in both Japanese and German, Tawada has had her novels and poems translated into more than 30 languages.

An avid reader since childhood, Tawada began studying German because she was a huge fan of Prague-born German writer Franz Kafka (1883-1924). She worked in Germany after graduating from Tokyo's Waseda University and made her debut as an author in Germany.

She said that wordplay was important for her parody and criticism because "instead of simply attacking the other party, that allows both sides to laugh together as they also acknowledge the other side."

While her works focus on immigrants and environmental issues, she also believes that literature has the ability to stir the reader's reason and emotion by stimulating their imagination and describing what has not yet existed as reality.

Saito found the gene that determines whether a cell becomes a reproductive one when he was conducting research in Britain and using detailed procedures to pin down the functioning of genes for individual cells. After that discovery, he uncovered the relationship between the gene and the creation of reproductive cells.

Saito has also succeeded in creating reproductive cells from mouse-derived induced pluripotent stem cells and creating offspring after fertilizing those reproductive cells. More recently, he has expanded the range of his research to cover monkeys and humans.

In trying to uncover the mysteries of plant fertilization, Higashiyama encountered more failures than successes but he never gave up on his research.

A major breakthrough came when he happened to use the Torenia flower for his observations. Part of the plant's ovule juts out and Higashiyama observed the instant when the pollen tube reached out and coiled around the tip of the ovule. Higashiyama also found the substance the ovule emits to attract the pollen tube toward it for fertilization. In that process, he also found that each plant emitted a different substance, which explained why different plants did not fertilize each other.

Higashiyama is now in charge of a state project to create entirely new species by mixing different plants.

Tanuma was awarded the special prize not only for the many years he worked as a photographer, capturing images of children around the world, but also for his efforts to improve the status of photographers by lobbying the government to extend copyright protection for photos.

For a long time, copyright on photos was only considered valid for the decade after the photo was released. But Tanuma lobbied the government for more than four decades to extend copyright protection to match that of other creative works. Finally in 1998, a legal revision was passed that extended the copyright to 50 years after the death of the photographer. Subsequently, that period was extended to 70 years.

In 2019, Tanuma became the first photographer awarded the Order of Culture decoration by the government.

Tanuma feels the special prize will further encourage everyone involved in the photographic world.

The Asahi Prize, presented by The Asahi Shimbun Foundation, honors distinguished individuals and groups in academics, arts and other fields who have contributed to advancements in Japanese culture and society. The prize was established in 1929 by The Asahi Shimbun.

The special award is conferred by The Asahi Shimbun to an individual or group that have spent many years engaged in social endeavors.