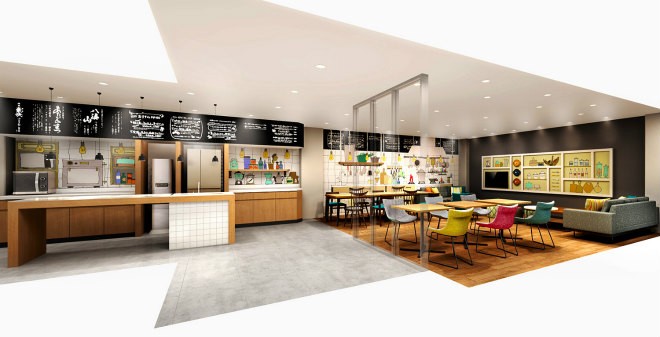 An artist’s rendition of the lounge of the Citadines Namba Osaka residential hotel, complete with a kitchen so residents can socialize (Provided by Ascott Japan Co.)

OSAKA--A residential hotel and a museum devoted to the history of leading department store chain operator Takashimaya Co. will feature in the Jan. 20 reopening of the company's east annex building in the city’s Naniwa Ward.

The additions are part of a major refurbishment. The exterior will retain its elegant ambience from the early Showa Era (1926-1989), while the interior has been given a full facelift.

The building was built between 1928 and 1937. With many design components, such as original arches and arcades still intact, the structure is also a government-registered tangible cultural property.

Takashimaya had mainly used it as its offices, but decided to renovate and expand spaces for rental with the aim of increasing profitability.

The residential hotel to be housed in the building is Citadines Namba Osaka. It will have 313 rooms.

The hotel brand, which is under the umbrella of a Singaporean company, already has three other hotels in Japan, two in Tokyo and one in Kyoto. It will be equipped with a gym and a lounge with kitchen where residents can socialize, the company said.