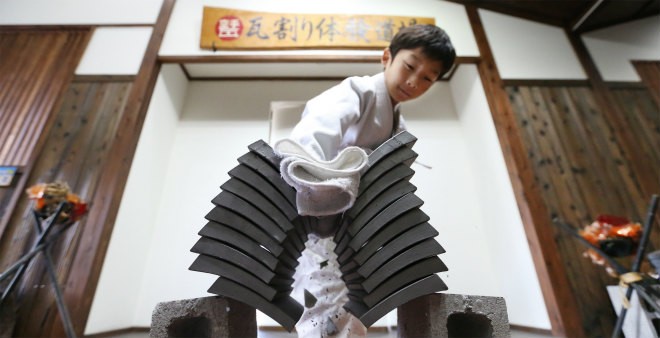 A boy breaks a stack of 10 tiles into exact halves in Minami-Awaji, Hyogo Prefecture, on Nov. 4. (Toyokazu Kosugi)

Then he brought his clenched fist down on a stack of 10 roofing tiles. In the blink of an eye, the tiles split in half.

The fourth-grader from Tokushima looked content with his feat.

The training hall is set up on the second floor of a small manufacturer of roofing tiles in Minami-Awaji, Hyogo Prefecture.

The Awaji Island where Minami-Awaji is located has been known as a major manufacturing center of “Awaji-gawara,” one of Japan’s three major “kawara” tile products.

The other two are Sanshu and Sekishu, produced in Aichi and Shimane prefectures, respectively.

Hisamitsu Taniike, 43, became president of the manufacturer Taniike Kenji Seigawarasho in 2008. Taniike is the fourth heir of the company that makes “mune-gawara” tiles used for the peak of a roof on a home.

Since he was young, Taniike had dreamt of “becoming a hero” and thought how cool it would be if he could break tiles with his bare hand.

He started developing a specially processed tile that breaks easily and through trial and error created the ideal thickness, roundness and hardness.

Two years later, he started selling the special kawara named “wareeru,” which means breakable in Japanese, on the internet. The item has become a hit as customers buy them as an entertainment novelty for parties.

Taniike then opened a martial arts gym to start offering tourists and others a chance to experience smashing tiles just like a karate performer.

Visitors have flocked to the dojo for many reasons, such as to “relieve stress” and to “impress a lover.”

So far, people from the age 4 to 93 have come to the facility. Among them was a stalwart who smashed a stack of 41 tiles.

In the production center of Awaji-gawara, a total of 26 million tiles are produced annually.

Local manufacturers produce “Ibushi-gawara,” which are known for their beautiful silver glaze, accounting for approximately a 40 percent share of the domestic production.

However, since the devastating 1995 Great Hanshin Earthquake, homeowners have been increasingly disinclined to use heavy roof tiles.

The number of Awaji-gawara business operators in the region has decreased to about 70, less than one-third before the disaster.

Overcoming such adverse conditions, Taniike and other manufacturers in the Awaji Island have made a concerted effort to pass the tradition onto future generations.

They have tried to develop tiles that are more durable and resistant to earthquakes and typhoons, improve designs and open up a new market including export opportunities.

“I am happy if the dojo plays an instrumental role for people to become familiar with kawara tiles,” Taniike said.

Yoshikazu Yasutomi, 60, chairman of the company, said kawara tiles bring out the natural flavor of the ingredients and enhance the mellowness.