Lisa’s In and Around Tokyo: Feel the pull of future transport at Yamanashi maglev center 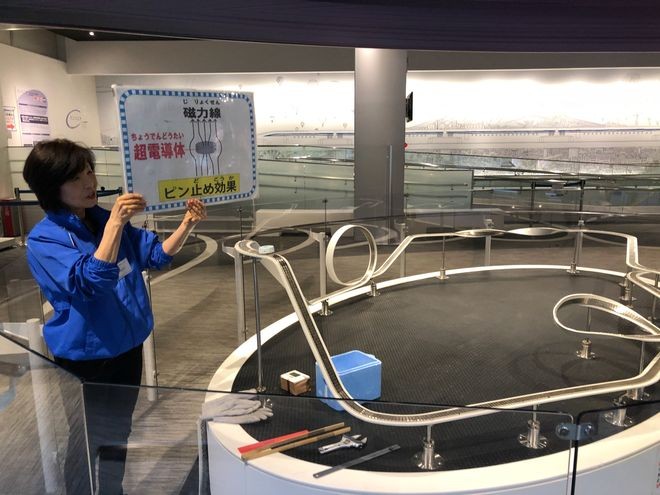 A tour guide explains the characteristics of superconductors. Various exhibits are explained in English, Chinese and Korean at the maglev center. (Photo by Lisa Vogt)

Trains, planes and automobiles are like magic time machines--you go inside, and a short while later, when the doors open and you step out, you’ve been transported to another place far, far away.

A next-generation, supercharged version of miraculous transit vessels can be seen and virtually experienced about an hour’s drive from Tokyo in Otsuki at the Yamanashi Prefectural Maglev Exhibition Center.

Before visiting the center, all I knew about maglev trains was that they were fast trains of the future that seemed to float somehow and glide along. Now, I know a whole lot more. The word maglev comes from the combination of magnet and levitation.

When I was little, I had a small whiteboard with colorful magnetic letters that stuck to the board. I remember being fascinated that some magnets liked each other, and others didn’t.

Later I would discover a physics principle that alike repels and opposites attract; that two north pole magnets pointed at each other will push each away, but a north and a south pole magnet will be attracted to each other. What a glorious fanfare moment this discovery was for me!

Maglev trains take advantage of these properties and switch north and south poles in rapid succession to provide levitation and propulsion. The magnets are on the sides of the train and the two walls that sandwich it. Unlike regular trains that use rotating wheels on rails to move, there’s minimal resistance, which makes the trains quieter, smoother and faster.

“Before you leave the exhibition center, put your hands on the body of the train that’s on display and feel it,” the friendly but professional guide who demonstrated superconductors’ characteristics using a miniature roller coaster told us.

“Once the train is in operation, it will be like boarding an airplane using a jet bridge, making it unlikely for you to ever touch the body of a maglev again.” I did as she said, and tenderly stroked the Shinkansen-like body. It was, well, just as one would expect. Still, kinda special, I guess. Yeah, I think.

The Chuo Shinkansen maglev train will whisk passengers from Shinagawa to Nagoya in 40 minutes and to Osaka in 67 minutes. Wow. JR aims to commence commercial services by 2045.

As with any project of this scale, there are political, environmental and fiscal issues and vested interests jostling about. Still, Japan holds the fastest maglev train world record at 603 kph, and that’s quite a magnetic pull.

This article by Lisa Vogt, a Washington-born and Tokyo-based photographer, originally appeared in the Dec. 1 issue of Asahi Weekly. It is part of the series "Lisa’s In and Around Tokyo," which depicts the capital and its surroundings through the perspective of the author, a professor at Meiji University.