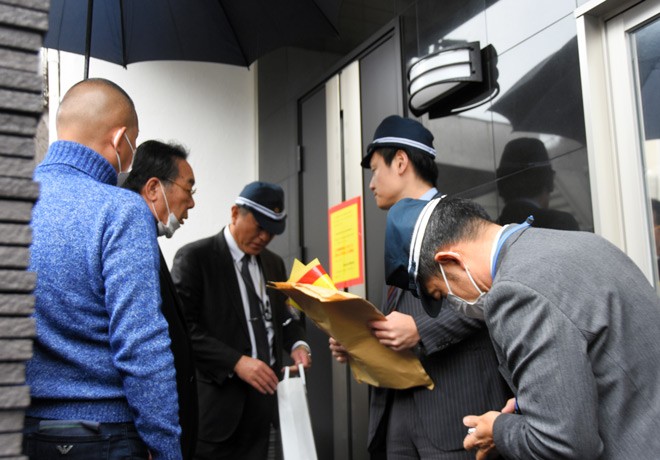 Hyogo prefectural police on Jan. 7 notify members of the Kobe Yamaguchi-gumi that entry to their headquarters is banned. (Mizuho Morioka)

The bloody battle between two organized crime syndicates has transformed into a chess match against police who now have wider powers to arrest yakuza gang members.

Around 10:30 a.m. on Jan. 7, about 10 police officers began posting notices at the Yamaguchi-gumi’s headquarters in Kobe’s Nada Ward, banning gang members from entering the premises.

Similar notices were placed at the Kobe Yamaguchi-gumi’s headquarters in Chuo Ward of Kobe.

Under the special designation, mobsters can be arrested just for entering gang offices. And the municipalities where the two gangs have their main offices as well as the residences of their kingpins have been designated as warranting extra vigilance by police.

However, investigative sources said the Yamaguchi-gumi appears to have already moved its headquarters to an affiliate gang’s office in Yokkaichi, Mie Prefecture, which is outside the area of tightened patrols.

In addition, the two main gangs and their subordinate groups are now subleasing offices in locations that have not been designated as requiring tougher police patrols.

In the specially designated areas, yakuza members are banned from loitering in the vicinity of a rival gang. And police can arrest gangsters if at least five of them are found gathering in the same location.

But officials at some police departments have raised doubts on whether they can easily carry out the order.

For one thing, police have not identified all members of the two gangs. So even if five individuals do appear together, it may be difficult to confirm that they are all gang members.

Given the difficulty of identifying gang members on the spot, a more practical approach will likely be to make arrests after examining security camera footage about such gatherings.

For their part, gang bosses have issued orders to members to avoid arrest. They have been told to pretend not to know another gang member if they happen to meet by coincidence.

Members have also been told not to sit together when, for example, taking a Shinkansen bullet train.

Some subordinate gangs under the Yamaguchi-gumi have taken to meeting in restaurants outside of Nagoya, which has been designated for tougher police action, the sources said.

To counter the gang members’ elusive actions, law enforcement authorities could impose more flexible provisions and arrest gang members if even three or four are found at the same location, a high-ranking officer with the Osaka prefectural police said.

Some police officials have raised concerns that the clampdown will force gang members to take their activities underground.

Although that could lead to a decreased presence of gangs in entertainment districts, the vacuum could be filled by groups of younger troublemakers who are not directly affiliated with the yakuza.

Since their breakup in 2015, the Yamaguchi-gumi and the Kobe Yamaguchi-gumi, as well as their affiliated gangs, have been engaged in a series of attacks against each other. The announcement that the gangs would receive the special designation came after an assault rifle was used to fatally gun down a senior gangster in Amagasaki, Hyogo Prefecture, in November.

The revision came about because of a gang war that erupted in 2006 in four prefectures on the main southern island of Kyushu.

A total of 47 yakuza-related incidents left 14 people dead, including a 34-year-old who was shot in a hospital. He had been mistaken for a gang member.

The two rival gangs, Dojin-kai and Kyushu Seido-kai, were given the special designation in December 2012. In addition to stricter control, police also sought to weaken the two gangs.

In the 18 months after the special designation, the two gangs saw a rapid decrease in membership.