Toyota to build prototype city of the future near Mount Fuji 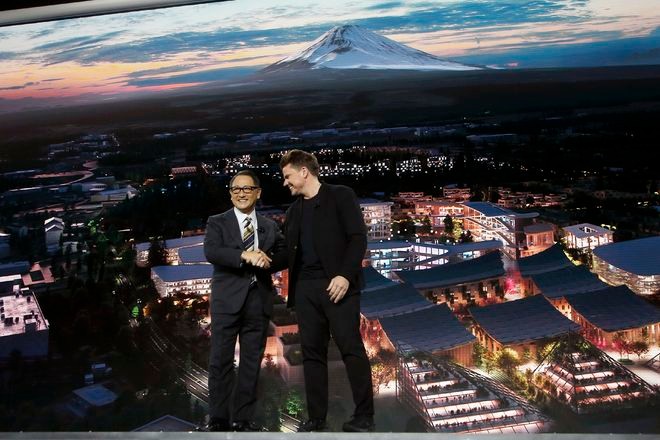 Toyota CEO Akio Toyoda, left, smiles as he is joined on stage by Danish architect Bjarke Ingels, CEO of Bjarke Ingels Group, after both talked about building the prototype Toyota city of the future, called the Woven City that will be a fully connected ecosystem powered by hydrogen fuel cells, before the CES tech show on Jan. 6 in Las Vegas. (AP Photo)

LAS VEGAS--Toyota Motor Corp. said on Monday it planned to build a prototype "city of the future" at the base of Mount Fuji, powered by hydrogen fuel cells and functioning as a laboratory for autonomous cars, "smart homes," artificial intelligence and other technologies.

Toyota unveiled the audacious plan for what it will call "Woven City," in a reference to its origins as a loom manufacturer, at the big annual technology industry show, CES.

"It's hard to learn something about a smart city if you are only building a smart block," James Kuffner, chief executive officer for the Toyota Research Institute-Advanced Development, told Reuters.

The "Woven City" idea, under discussion for a year, is aimed at creating safer, cleaner, more fun cities and learning lessons that could be applied around the world, he added.

It will have police, fire and ambulance services, schools and could be home to a mix of Toyota employees, retirees and others, Kuffner said.

The development, to be built on the site of a car factory that is planned to be closed by the end of 2020, will begin with 2,000 residents in coming years, and also serve as a home to researchers.

Toyota did not disclose costs for the project, whose construction is scheduled to start next year, and which seeks to re-imagine a city, but executives said it had been extensively vetted and had a budget.

The plan for a futuristic community on 71 hectares is a big step beyond proposals from Toyota's rivals.

Executives at many major automakers have talked about how cities of the future could be designed to cut climate-changing emissions, reduce congestion and apply internet technology to everyday life.

The company's proposal showcases not only the ambition of Chief Executive Akio Toyoda, but also the financial and political resources Toyota can bring to bear, especially in its home country.

"You know if you build it, they will come," said Toyoda, who called the project "my personal 'field of dreams.'"

Toyota said it is open to partnerships with other companies seeking to use the project as a testing ground for technology.

Still Toyoda acknowledged not all may see the wisdom of what could be an expensive and lengthy project.

"You may be thinking, 'Has this guy lost his mind?'" Toyoda asked an audience in Las Vegas, to laughter. "'Is he like a Japanese version of Willy Wonka?' Perhaps."