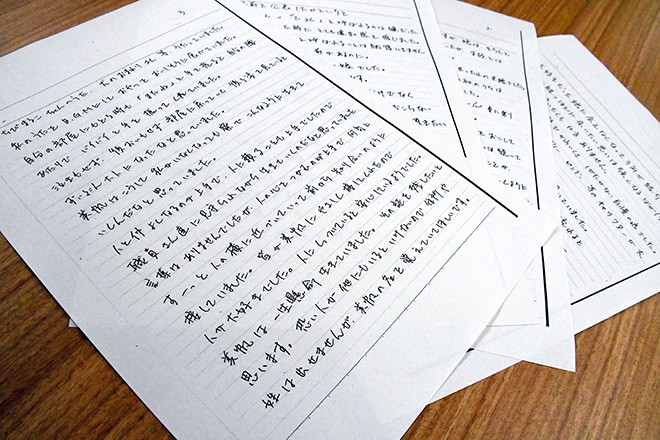 A statement released by the family of Miho, a 19-year-old who was killed in the stabbing spree at a care home for disabled people in July 2016. (Shun Hayashi)

YOKOHAMA--The family of a teenager killed in the 2016 stabbing spree in Kanagawa Prefecture disclosed the victim’s first name after much reluctance over concerns about privacy and discrimination against disabled people.

“Miho embraced life,” the family said in a statement. “We would like people to remember the name of Miho.”

Miho, 19, who had autism, was one of 19 people killed in the rampage at the Tsukui Yamayurien care facility for disabled people in Sagamihara on July 26, 2016. The attack left 26 others injured, including staff members.

The murder trial of Satoshi Uematsu, who has admitted to the attack, opened on Jan. 8 at the Yokohama District Court.

Some of the victims were identified in the first hearing. But most of the others were called “Ko A” or “Otsu B.” “Ko” refers to those who were killed, while “Otsu” is used for those injured.

It was a special arrangement made after the court granted requests from victims’ families who insisted on maintaining anonymity of their loved ones. The families expressed fears that disclosure of the names in the high-profile case could fuel discrimination against disabled people.

Miho’s family had long been reluctant to divulge her name because they were worried about being hounded by reporters seeking interviews and adding to their pain, according to a lawyer representing the family.

But the parents decided to reveal Miho’s first name because they felt awkward about having their daughter referred to only as “Ko A” at the trial. They did not disclose Miho’s family name.

“Our daughter had a lovely smile and was adorable and a source of pride,” the family’s statement said. “The more time passes by, the stronger our desire to meet her again becomes.”

She loved music and anime created by Studio Ghibli, particularly “Kiki’s Delivery Service” and “Laputa: Castle in the Sky,” according to the statement.

The family also said that although Miho did not speak much, she was “good at making friends with others.”

Miho had previously stayed at a different care facility, but she disliked returning there after spending time with her family on temporary visits home.

However, after about two years of living there, she went back to the facility without weeping.

“We felt a sense of sadness, but we also felt that she was becoming mature,” the statement said.

Miho was killed about three months after she began residing at Tsukui Yamayurien.

The family said about Uematsu’s trial, which will be heard by citizen judges, “We are hoping that it will prompt the public to contemplate what society should do to prevent a recurrence of such a tragedy.”