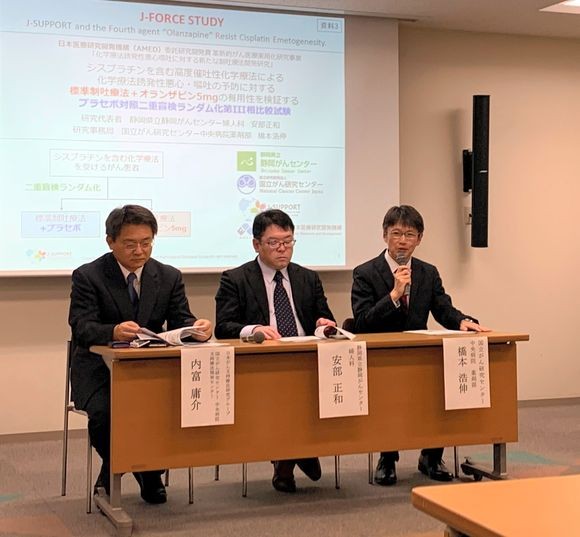 Hironobu Hashimoto, right, a researcher in the Department of Pharmacy at the National Cancer Center Hospital, announces the development of a new method to inhibit nausea in patients receiving anticancer agents at a news conference in Tokyo’s Chuo Ward on Dec. 11. (Ayako Tsukidate)

A Japanese research team has developed a new method to inhibit vomiting and nausea in patients after they are administered anticancer drugs.

Scientists at the National Cancer Center in Tokyo and other institutes said they discovered that the administration of an antipsychotic agent can control emesis that patients suffer on the second to fifth days after chemotherapy administration. It is difficult to inhibit nausea during this period using conventional techniques.

The findings were published in the British journal The Lancet Oncology on Dec. 12.

"I want to reduce the number of patients who have difficulties because the existing antiemetic drug does not work," said team member Hironobu Hashimoto, a researcher in the Department of Pharmacy at the National Cancer Center Hospital. "I hope the new method will spread widely."

More than half of the patients who receive anticancer agents are said to subsequently suffer from nausea or emesis. When the side effect is severe, patients sometimes cannot receive the necessary amount of anticancer agents or treatment cannot be continued.

Under the current standard antiemetic method, steroids and drugs that affect the brain are used to stop nausea. However, such agents cannot inhibit nausea sufficiently two to five days after receiving intravenous drips.

The team conducted clinical trials from February 2017 at 30 hospitals, including Shizuoka Cancer Center, using an anticancer medicine known as cisplatin, the administration of which often leads to nausea.

The 710 test subjects with tumors were split into two groups, with 354 given conventional antiemetic treatment alone and the other 356 given 5 milligrams of an antipsychotic agent called olanzapine, in addition to the standard treatment.

The results showed that vomiting was well controlled two to five days after cancer treatment in 79 percent of individuals in the olanzapine-administered group, eliminating the need for additional administration of an anti-nausea drug.

Other side effects of the anticancer agent, such as daytime drowsiness and reduced appetite, were also inhibited in the olanzapine-treated group.

The new method is expected to be adopted as a standard therapy after treatment guidelines in and outside Japan are revised. The team said it is also planning to carry out an additional clinical trial using another anticancer drug.