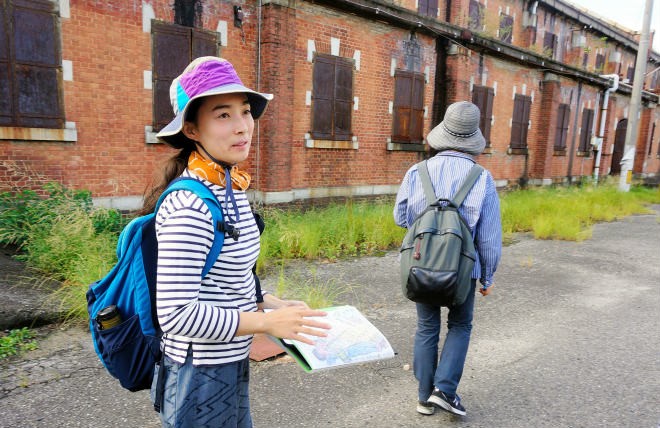 The campaign to preserve the site is gaining momentum as this Aug. 6 will mark the 75th anniversary of the attack that leveled much of Hiroshima and claimed tens of thousands of lives.

The historic building was one of the largest structures left standing and is one of 86 registered by the city as having survived the atomic bombing.

In December, the Hiroshima prefectural government revealed its plans to demolish two of three buildings it owns at the site.

Hibakusha are also pushing to preserve the structure as the building often features in wartime accounts given by atomic bomb survivors.

“The red-brick warehouses are on the verge of demolition. Please support our campaign by signing your name," one resident said to passers-by.

After an hour of so, around 100 signatures had been gathered.

The same day, the Hiroshima Prefectural Confederation of A-bomb Sufferers Organizations headed by Sunao Tsuboi, submitted a request to the prefectural authorities to preserve the buildings.

The former factory site occupies an area of about 17,000 square meters, and the four buildings stand in the shape of an L.

Built in 1913, the facility produced military uniforms and boots for Japanese troops. Situated just 2.7 kilometers from ground zero, it was turned into a first-aid station in the aftermath of the bombing. Many people succumbed to their injuries inside its walls.

According to the prefectural government, the No. 1 building closest to ground zero will undergo a complete restoration by fiscal 2021.

However, the adjacent No. 2 and No. 3 buildings are expected to be torn down by fiscal 2022 because they at risk of collapsing in a major earthquake.

Sunao Katabuchi, who directed the animation film “In This Corner (and Other Corners) of the World” that depicted Kure, an important naval base in Hiroshima Prefecture during the war, made an impassioned plea to preserve the factory site when he visited it on Dec. 23.

“The buildings are not ours, but belong to future generations,” Katabuchi said.

When he made the film, Katabuchi interviewed former residents and collected numerous documents so he could reproduce the town as it looked before the bombing.

Touching the factory’s red-brick wall, he said: “There are limits to portraying people's lives during wartime and before the war in films. People can’t physically touch things in films we made.”

“Our aim is to preserve the structure which shows its scars to future generations,” she said.

Fukuoka solicited support from about 16,000 people in Japan and overseas in the course of just one month.

Mayu Seto, a 28-year-old Kure resident, pitches in by holding events with Fukuoka to trace the experiences of hibakusha and spreading messages on social networking sites from experts calling for the buildings to be preserved.

“I am desperate to attract the attention of more people,” she said.

Koji Ikeda, who heads the Hiroshima Chamber of Commerce and Industry, said at a news conference late last year that the site “is very important as part of the nation's heritage as it sends a message about cultural values and peace.”

The Hiroshima prefectural government is sympathetic but insists that safety is the key issue.

Officials said that retaining one of the structures will serve to pass on its value as a building that survived the atomic bombing. It is seeking opinions on its website through Jan. 16.

Renovating and dismantling the buildings is expected to cost around 800 million yen ($7.3 million). The local government plans to include that outlay in its initial budget plan for fiscal 2020.

If it preserves the three buildings, the cost will rise to about 8.4 billion yen because of the need to make the structure quake-resistant.

The remaining No. 4 building is owned by the Finance Ministry’s Chugoku Local Finance Bureau, which is weighing whether to tear down the structure.

Local residents seeking to preserve the buildings plan to hold meetings in Hiroshima and Tokyo this month.