Suga’s influence could wane with resignation of second associate 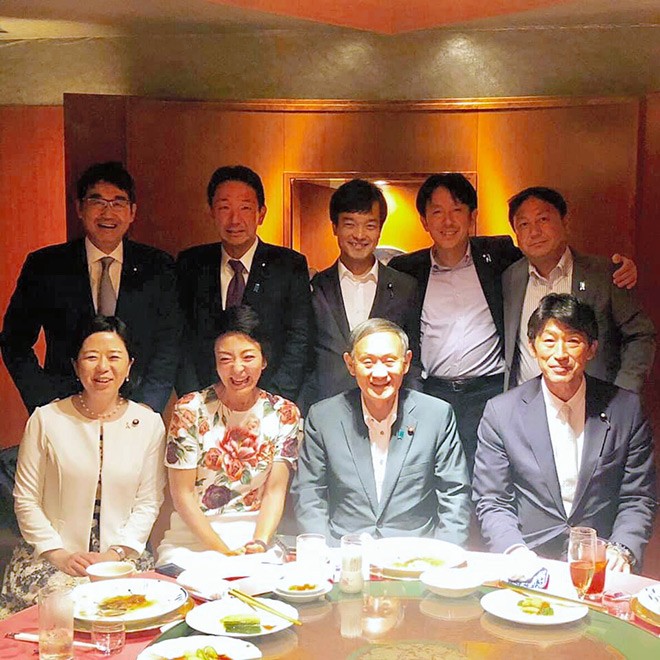 The resignation of a second Cabinet member in less than a week is bound to hurt Prime Minister Shinzo Abe's approval ratings, but it is Chief Cabinet Secretary Yoshihide Suga who will likely feel the most pain.

Suga, 70, has long been in the public eye as the government's most senior spokesman and had been tipped by some political insiders as a possible successor to Abe.

But the resignation on Oct. 31 of Katsuyuki Kawai as justice minister, coming on the heels of the Oct. 25 departure of Isshu Sugawara as the economy minister, is a double blow to Suga because the two lawmakers were among his closest associates.

Many within the ruling Liberal Democratic Party believe Suga was instrumental in the elevation of Kawai and Sugawara to their first ministerial posts when Abe reshuffled his Cabinet on Sept. 11.

The two lawmakers had set up separate groups of younger lawmakers loyal to Suga before they were promoted.

When asked about the resignations of Sugawara and Kawai on Oct. 31, Suga said at his daily news conference, "There will be a need to seriously accept the severe criticism that has arisen."

Suga, despite his dour expression, leaped into the public eye when he announced the name of the new imperial era, Reiwa, on April 1. That prompted speculation his political star was rising.

Kawai stepped down over allegations his wife, Anri, an Upper House member, may have violated the Public Offices Election Law by overpaying campaign staff during the July Upper House election.

The group set up by Kawai to support Suga is called "Himawari-kai" (Sunflower group).

In August, Kawai reported on his Facebook account that his wife had joined Himawari-kai. He included a photo of them sitting at a gathering that included Suga.

Because of his ties to junior coalition partner Komeito, Suga was able to convince supporters of that party to vote for Anri, one reason she was successful in the race.

The Hiroshima Prefecture contest was also considered a veiled contest between Suga and Fumio Kishida, the LDP policy chief who has also made known his ambitions of taking over once Abe steps down.

Kishida had backed Kensei Mizote, an incumbent in the Hiroshima Prefecture constituency, but he was bested by Anri and an opposition-backed candidate.

Subsequently, not only did Kishida not attain his wish of becoming LDP secretary-general, but Suga was able to convince Abe to name two close associates as Cabinet ministers.

But there were some within the LDP who raised their eyebrows about the naming of Kawai and Sugawara because of past reports of scandals surrounding the two lawmakers.

Weekly magazines had reported about Kawai physically abusing an aide, while Sugawara had allegedly given expensive gifts to his supporters in his Tokyo district in the past.

Kishida was not gloating on Oct. 31 after Kawai stepped down, only saying at a meeting of the LDP faction that he heads, "Political responsibilty is extremely heavy so we must take that to heart in order to carry out the responsibility entrusted in us by the public."

However, one Kishida faction member criticized Suga for his personnel choices in the last Cabinet reshuffle.

"Suga ensured that two individuals long considered to have checkered pasts would be chosen, and now they have both resigned," the faction member said.

While several groups within the LDP support Suga, most are made up of those who do not belong to any LDP faction.

One former Cabinet minister said that because Suga himself does not have his own faction, the unity within his group is weak.

"Once his influence decreases, group members will start leaving," the lawmaker said.

Another LDP lawmaker speculated that Abe will start to distance himself more from Suga.

"The prime minister will likely conclude he made errors based on Suga's personal picks," the lawmaker said.

Suga and Finance Minister Taro Aso are the only Cabinet ministers who have kept their posts since Abe began his second stint as prime minister in December 2012.