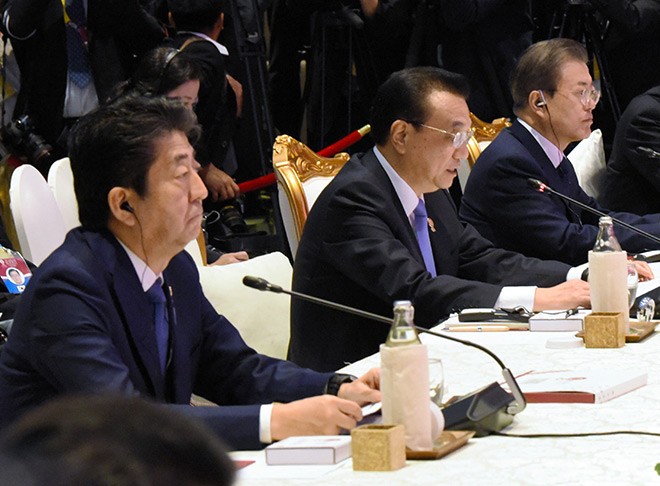 BANGKOK--In their first discussion in over a year, Prime Minister Shinzo Abe and South Korean President Moon Jae-in spoke for about 11 minutes on Nov. 4 on the sidelines of the ASEAN summit here.

A spokesperson for the South Korean presidential office said the two leaders agreed on the importance of the bilateral relationship and reconfirmed the principle of resolving issues through dialogue.

Moon proposed holding high-level governmental discussions if the need arose, while Abe reportedly said, "Let us make every effort to seek a way to resolve the issues through all possible avenues."

The spokesperson said the conversation, held just before the start of a meeting with leaders of ASEAN member nations and Japan, China and South Korea, was "extremely cordial and held in a sincere atmosphere."

The Japanese Foreign Ministry also revealed on Nov. 4 that the two leaders had met. One official said Abe transmitted the fundamental stance of Japan on the various bilateral issues facing the two nations.

Abe and Moon also smiled and exchanged handshakes at a dinner reception held here on Nov. 3.

Bilateral ties have deteriorated since autumn 2018 when the South Korean Supreme Court handed down rulings ordering Japanese companies to pay compensation to former wartime Korean laborers. No meetings between Abe and Moon have been held since September 2018, and South Korean officials had sought such a meeting on the sidelines of the ASEAN summit.

The summit might be the last opportunity for the two leaders to meet before Nov. 23, when the General Security of Military Information Agreement between Japan and South Korea comes to an end.

Both Abe and Moon had initially planned to attend the Asia-Pacific Economic Cooperation summit scheduled for Chile in November, but that conference was canceled by Chilean officials because of general unrest in the South American nation.