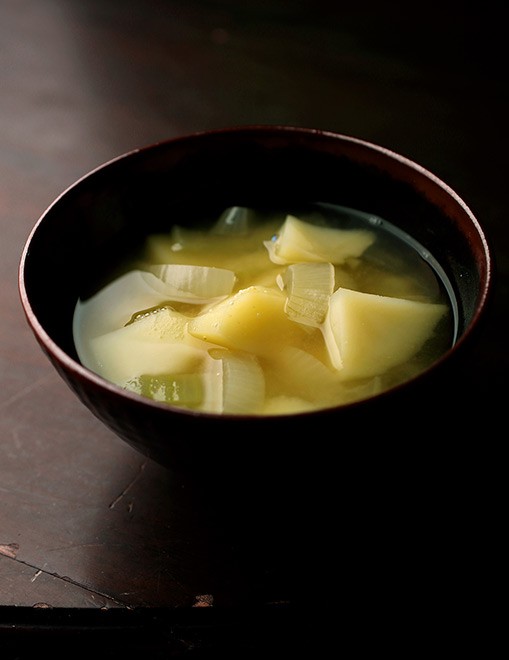 Miso soup made with “niboshi” stock (Photo by Masahiro Gohda)

You could call “niboshi” stock, made from dried infant sardines, and miso sworn allies. When the two are used to make miso soup, the niboshi provides umami that rivals that of miso, and the miso works to hide the distinct fish flavor.

This is how the miso soup turns out rich yet clear. You can add sweetness to the soup by putting in onion and potato.

The umami and aromatic component of niboshi dissolve into water when immersed and become more complex when heated. This week’s procedure of immersing the ingredients for 30 minutes and simmering for seven to eight minutes may be regarded as the standard. But you could also immerse them for six hours and skip the simmering. Doing so makes the soup taste milder.

Niboshi stock can be used in many other dishes, such as udon noodles and “oden” (a hot pot made that includes fish-paste products and vegetables). It also goes well with “kenchin-jiru” (Japanese vegetable soup), simmered burdock root and satoimo taro because of its good match with root vegetables.

If you add soy sauce sparingly to the salt-based stock, it will help draw out the natural flavor of the ingredients.

Niboshi stock is also a household staple for soup-making in South Korea. Miso-flavored jjigae stew is prepared with kimchi and tofu. You can stir-fry niboshi used in the stew with sesame oil and eat it as well.

Niboshi are infant sardines that have been boiled in saltwater and then dried. In western Japan, they are called “iriko.” The most common type is “katakuchi-iwashi” (Japanese anchovy).

Though the names of the fish differ according to region, small ones around 3 centimeters are called “kaeri.” Ones around 5 cm are called “koba." At 8 cm they become “chuba.” Those longer than 10 cm are “oba.”

Small fish whose guts have yet to develop don't taste bitter, even when eaten whole. They have little fat and the resulting stock tastes light.

The stock becomes rich and full-bodied when larger niboshi are used.

Despite being dried goods, they lose their flavor from oxidation.

Niboshi should be preserved in a fridge or freezer, away from humidity. It is advised to buy an amount that can be consumed in one to two months.

1. Remove niboshi's head, split in two from the base of head (PHOTO A). Remove black guts. Add water and niboshi in pot and leave immersed for more than 30 minutes.

2. Place pot over medium heat and bring to a boil. Turn down to low heat and skim off foam (PHOTO B). Simmer for 7 to 8 minutes and run through sieve. You can scoop the niboshi out with a skimmer.

※ Stock may be prepared by immersing niboshi in water longer, for instance overnight, to draw out enough umami and skipping the simmering process. During summer, keep niboshi immersed in water in the fridge.

Hiroya Kawasaki studies the science of tastiness and cooking methods at Ajinomoto Co.’s Institute of Food Sciences and Technologies.

Use a hand to break half a block (150 grams) of soft (kinugoshi-type) tofu into pieces of about 2 cm on a side. Place in sieve and drain water. Cut 40 grams of Chinese cabbage kimchi into 2 cm-wide pieces. Slice 1/4 green onion (naganegi) at an angle. Pour 2 tsp sesame oil in pot, briefly stir-fry the used niboshi and kimchi. Add 2 cups niboshi stock, tofu and green onion and cook for 2 to 3 minutes until green onion becomes tender. Dissolve in 1 and 1/3 Tbsp miso and bring to a boil.

In the manufacturing process of dried goods such as niboshi, the ingredients are boiled and dried to remove the water content and concentrate the umami components. A chemical reaction during the maturation process also works to produce their aromatic component. Western stock, such as bouillon, is made by simmering ingredients for a long time from their raw state. With Japanese stock, time and effort are focused on making the dried goods, and the cooking time is short.