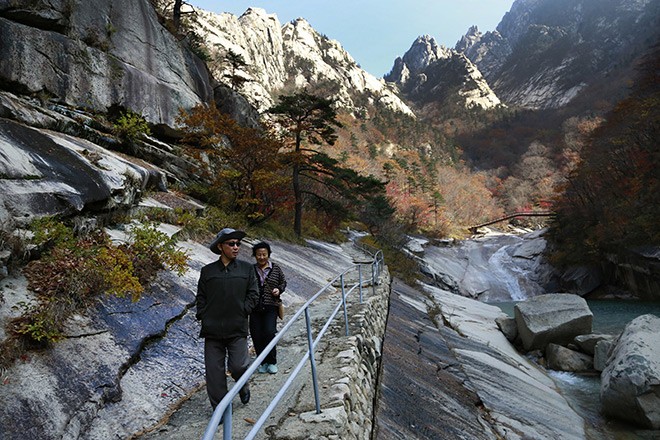 Tourists walk on a trail at Mount Kumgang, known as Diamond Mountain, in North Korea on Oct. 23, 2018. (AP file photo)

SEOUL--South Korea has offered to send a delegation to check on South Korean-built facilities at a long-stalled joint tourist resort in North Korea, Seoul said Wednesday, as the North is pushing to tear them down.

Seoul's Unification Ministry sent a message Tuesday proposing a delegation dispatch to conduct safety checks on those facilities, but ministry spokesman Lee Sang-min said North Korea hasn't responded. He said the dates for a delegation trip to the mountain could be determined through consultations with North Korea.

South Korea earlier proposed face-to-face talks on the issue. North Korea has rejected that and insisted on document exchanges.

South Korean-run tours to the mountain resort, once a symbol of inter-Korean reconciliation projects, were halted in 2008 when a North Korean soldier fatally shot a South Korean tourist who the North says entered a restricted area. The tours had been a source of hard currency for the impoverished country.

The latest development on the mountain tours comes amid a standstill in a U.S.-led diplomacy aimed at depriving North Korea of its nuclear weapons. North Korea has earlier called for the tours' restart, but South Korea couldn't do so while international sanctions remain in place over the North's nuclear program.