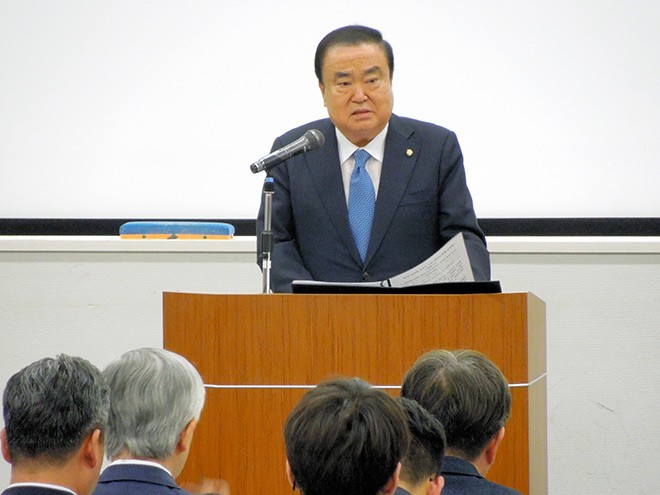 Moon Hee-sang, speaker of South Korea’s National Assembly, discusses a range of issues about souring relations between Japan and South Korea at Waseda University in Tokyo on Nov. 5. (Takuya Suzuki)

The speaker of South Korea’s National Assembly proposed raising donations in Japan and South Korea as a way of resolving the thorny issue of wartime laborers demanding compensation from Japanese companies.

In a speech delivered at Tokyo's Waseda University on Nov. 5, Moon Hee-sang said he is considering submitting a bill to the National Assembly to set up a new fund for compensation, underscoring the need for Korean lawmakers to make efforts toward the resolution of the issue.

Tokyo maintains that all the wartime compensation claims by South Korea were settled by the 1965 bilateral treaty that restored diplomatic relations between the two countries.

Moon said the envisioned bill should be crafted in a manner that resolves other sticky issues stemming from the two countries’ shared past. He noted that the issue of “comfort women” who were forced to provide sex to wartime Japanese soldiers remains unsolved as far as his country is concerned.

“The legislation should be aimed at resolving these outstanding issues in a comprehensive manner,” Moon stated.

The speaker said it would be difficult to secure sufficient financial resources to compensate victims based solely on the South Korean government’s call for only Japanese and South Korean companies that used wartime Korean laborers to chip in.

Moon said his proposal is aimed at also attracting Japanese and South Korean businesses with no wartime associations as well as the general public so that they can “donate voluntarily” for a new effort.

Moon said about 560 million yen ($5.18 million) left over by the now defunct foundation established in South Korea to assist former comfort women could be used for the purpose.

The foundation was set up following a landmark agreement between Tokyo and Seoul in December 2015 to resolve the comfort women issue once and for all.

The comfort women issue has long been a source of bitterness between the two countries.

The 2015 agreement was roundly criticized by victims and the South Korean public on grounds it was hastily put together without sufficient input from the parties involved.

The unpopular foundation was scrapped by President Moon Jae-in's administration.

“I am hoping that the effort (to enact the legislation for the new fund) will lead us to open the door for reconciliation and cooperation,” the speaker said, expressing his hope that Japan will support the initiative.