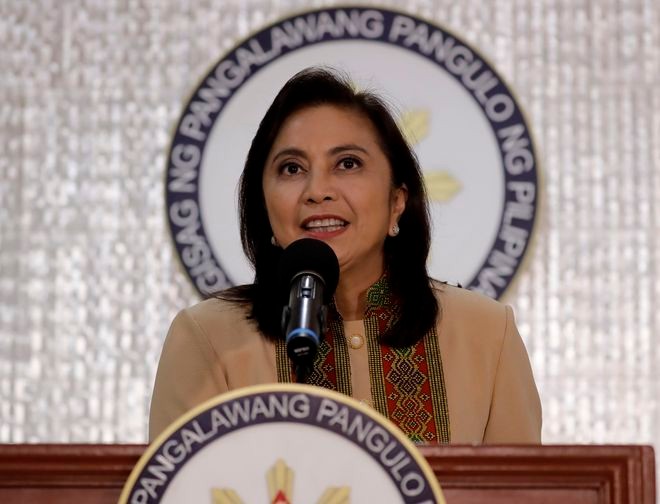 MANILA--The vice president of the Philippines on Wednesday accepted President Rodrigo Duterte's offer for her to play a lead role in his deadly crackdown against drugs, even though she's been critical of the campaign and has been warned it could be a political ploy to destroy her.

Vice president and former human rights lawyer Leni Robredo said that by agreeing to the unusual offer, she may be able to save lives under the campaign, which has left thousands of mostly petty drug suspects dead in purported gunbattles with police, alarming Western governments and rights groups.

"Many have expressed concerns that this is an insincere offer, that it's a trap which only aims to undermine and put me to shame," Robredo said at a news conference. "While it can be said that this offer is just politicking and that the agencies won't really follow me and would do everything so I won't succeed, I'm ready to endure all of these."

"If I can save even one innocent life, my principles and my heart tell me that I should try," she said.

Communications Secretary Martin Andanar welcomed Robredo's decision. "We believe that the loudest critics should act beyond mere observers, but be active contributors for change," he said.

"Vice President Robredo must be granted power to halt the daily killings and change the deadly command structure we have documented, otherwise this move will be an empty gesture," said Nicholas Bequelin, Amnesty International's regional director for East and Southeast Asia. "Her appointment does not change the fact that the Duterte administration's 'war on drugs' amounts to crimes against humanity."

Piqued by Robredo's constant criticism of his drug campaign, Duterte formalized an offer to appoint her as one of two heads of an inter-agency committee that includes the police and the military and is tasked with overseeing and coordinating the government's efforts to combat illegal drugs.

It's the latest twist in the unprecedentedly massive crackdown Duterte launched after he took office in mid-2016. More than 6,300 mostly petty drug suspects have been killed after allegedly resisting arrests and about 1.3 million others have surrendered, officials said. But human rights groups have cited a higher death toll and accused some policemen of killing unarmed suspects based on flimsy evidence and altering crime scenes to make it look like the suspects violently fought back.

At least two complaints for mass murder have been filed before the International Criminal Court over the large-scale deaths, but Duterte has vowed to continue with the bloody campaign up to the last day of his presidency in June 2022.

Duterte and the police have denied condoning extrajudicial killings under the crackdown.

Presidents and vice presidents are separately elected in the Philippines, resulting in candidates from rival parties like Duterte and Robredo ending up in the country's top leadership and often colliding on policies.

Robredo, 58, is a respected former human rights lawyer and political newcomer, while the 74-year-old Duterte is a former longtime city mayor whose image as an extra-tough crime fighter helped him win the 2016 presidential race in a country long exasperated by widespread violence.

Robredo has raised the alarm and questioned the drug killings and other actions of Duterte, including his call for the return of the death penalty in the largely Roman Catholic nation and his decision to allow the 2016 burial of dictator Ferdinand Marcos in a heroes cemetery.

In 2016, Robredo resigned as housing secretary, a Cabinet post, citing "major differences in principles and values" with Duterte and an unspecified plot to remove her from the vice presidency, but she stayed on as vice president. She said at the time that the last straw was when she was forbidden from attending Cabinet meetings amid her public differences with Duterte.