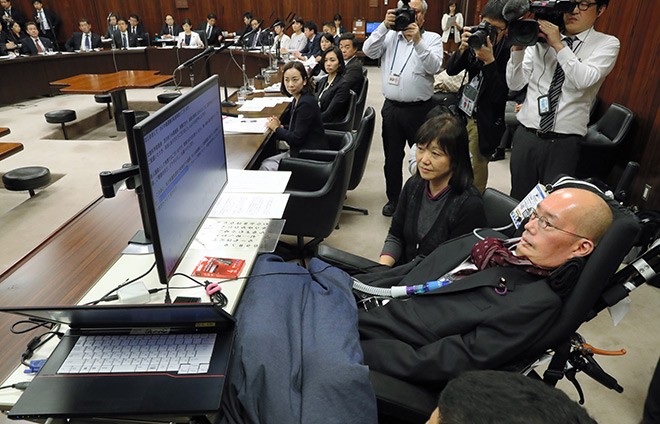 Yasuhiko Funago prepares to ask his first questions at a session of the Upper House Education and Science Committee on Nov. 7. (Takeshi Iwashita)

Newly elected Upper House member Yasuhiko Funago, who has amyotrophic lateral sclerosis (ALS), asked his first questions at a session of the Upper House Education and Science Committee on Nov. 7.

Funago, a member of the Reiwa Shinsengumi party, cannot move his arms or legs or speak. He communicates by moving the muscles in his eyes and mouth, and using a panel containing characters and words.

At the session, Funago was accompanied by a secretary and two helpers. The helpers read Funago's statements from the panel, after which, his secretary repeated them to the committee members.

Funago exceeded his allotted 25-minute question time, taking 45 minutes. But this was allowed as it was decided in advance that it would not include time spent on communicating through the panel.

The tests were initially planned to start in fiscal 2020 as part of a new standardized university admission exam program but the ministry recently decided to postpone them.

“Individual testing operators act in their own different ways for arrangements and accommodations for the disabled,” Funago said.

Hagiuda responded, “It is true that there are variations among (operators). We will discuss building a system to examine if arrangements and accommodations are appropriate.”