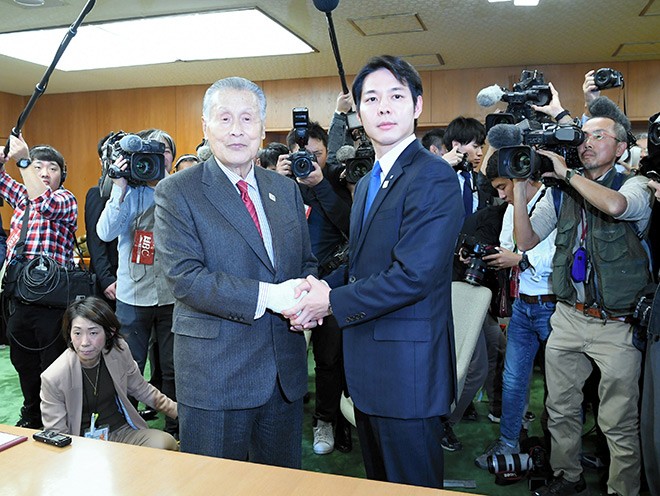 Yoshiro Mori, president of the Tokyo Olympics organizing committee, meets with Hokkaido Governor Naomichi Suzuki in the prefectural government building in Sapporo on Nov. 7 to talk about the Olympic marathon and race walk events to be held there. (Kengo Hiyoshi)

SAPPORO--In a change from tradition, the men's marathon at the 2020 Tokyo Olympics, which has been moved to Sapporo, may not be staged on the final day of the Games.

Yoshiro Mori, president of the Tokyo Olympics organizing committee, mentioned the possibility of changing the date in a meeting with Hokkaido Governor Naomichi Suzuki on Nov. 7.

In past Summer Olympics, it has been customary for the men’s marathon to be held on the final day and the medals to be awarded at the closing ceremony.

According to Mori, if the marathon is staged on the last day, it would be difficult for the competitors to find time for the doping test and travel to Tokyo in time for the closing ceremony.

“We would like to set the date earlier so that athletes can attend the ceremony,” he said.

Mori visited Sapporo for the first time since the International Olympic Committee decided to move the marathons and race walk events there out of concerns of the health risks posed to athletes by the intense summer heat in the capital.

Regarding the cost of moving the events to Sapporo, which Tokyo has refused to cover, Suzuki said, “I think the organizing committee should basically shoulder the costs.”

In reply, Mori said, “We will try hard not to cause too much trouble to the host city.”