ANIME NEWS: IMART festival in Ikebukuro to focus on future of anime, manga 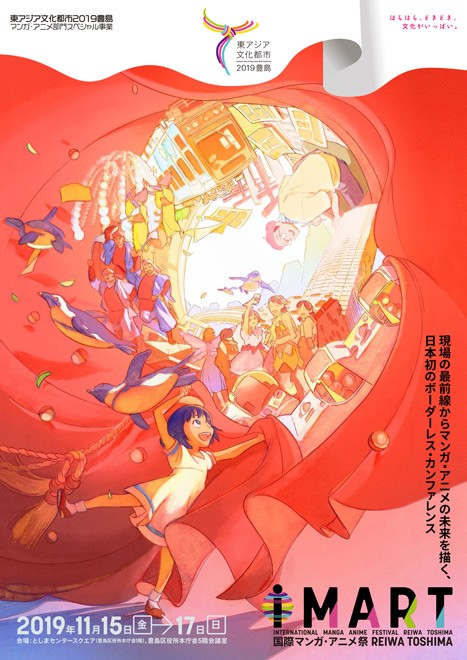 Manga and anime experts will peer into the future of the subcultures at the International Manga Anime Festival Reiwa Toshima (IMART) in Tokyo’s Toshima Ward from Nov. 15-17.

The ward is where Tokiwa-so, a now-defunct apartment complex occupied by budding manga artists who went on to become founding fathers of Japan’s modern cartoon culture, once stood.

IMART is the closing event of the manga and anime division of the Culture City of East Asia 2019 Toshima project. It takes place at Toshima Center Square and a conference room in the ward office in the Ikebukuro district.

The highlight of the festival is a conference themed on the future of manga and anime. It will bring together leading companies and industry professionals who serve as panelists and lecturers to share their expertise with the public.

Participants can learn about the rapidly changing industries and make use of the knowledge to create new possibilities for the art forms.

The conference will cover film festivals, public-private partnerships, technology, education and many other topics from various fields.

IMART also aims to make Toshima Ward a promotional and cultural exchange base and an interaction hub for companies and artists mainly from Japan, China and South Korea.

Achievements made during the Manga Mirai Hackathon and Animated Learning Toshima 2019, which was held prior to IMART to create an experimental work of manga with a team of diverse experts, will be also unveiled at the festival.

For more information, visit the official website at (https://culturecity-toshima.com/en/).