2nd defendant flees while under escort by Osaka prosecutors 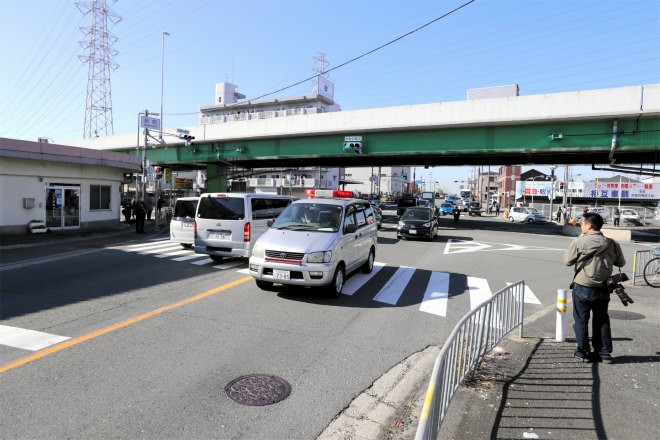 A crossing where a defendant in handcuffs escaped in Higashi-Osaka, Osaka Prefecture, on Nov. 9. (Masaru Komiyaji)

OSAKA--In the second such incident in under two weeks, a man facing drug charges escaped from a vehicle while he was being taken to a detention facility in Osaka Prefecture, prosecutors said Nov. 9.

Oue, 42, a resident of Kishiwada in the prefecture, was handcuffed and being escorted to the Hiraoka police station in Higashi-Osaka in a van belonging to the prosecutors’ office.

The van left the Kawachi police station in Higashi-Osaka at 3:40 a.m. At around 4 a.m., Oue complained that his handcuffs were too tight.

When one of the assistant officers unlocked the left-hand side to adjust them, Oue went berserk. He opened the car door after throwing off the officers and fled with his right hand still in the cuffs and a rope around his waist.

Oue is 171 centimeters tall and thin, with his hair cropped. He was wearing a dark blue shirt and camouflage-pattern trousers. He was shoeless.

Although he was granted bail on April 26, it was canceled on Nov. 7 after he failed to appear for his trial at the Kishiwada branch of the Osaka District Court.

Police found him in Higashi-Osaka and handed him over to Osaka prosecutors.

As the Kawachi police station did not have space to detain him, he was being transported to the Hiraoka police station, about 1.8 kilometers away.

Oue’s escape came after a female defendant charged with violating traffic laws fled in a car on Oct. 30 after she came to the prosecutors’ office in Kishiwada.

She had been released on bail, but it was withdrawn on Oct. 15 after she did not appear for her court hearings.

Satoru Ueno, head of the general affairs department at the Osaka District Public Prosecutors’ Office, apologized for the latest incident, although he added that there were no missteps committed by the assistant officers in the escort detail.

“We regret the case, and our handling was not adequate,” he said.

The escapes occurred after courts became more proactive in granting bail in recent years in cases in which defendants are less likely to destroy evidence and escape.

But bail is usually revoked when a defendant fails to show up for a hearing and their whereabouts are unknown.

According to judiciary statistics, the bail of 141 defendants was withdrawn in 2018, up from 98 defendants in 2017.

“Defendants were not as willing to show up as courts obliged them to do,” a senior public prosecutor said.

Although the prosecutors’ office, rather than the police, is primarily responsible for taking defendants into custody again after their bail is revoked, it is not an easy task for them.

There are not many assistant officers to do the job and they are also not trained in arrest techniques, according to judicial experts.

Prosecutors can request assistance from police for escort duties, but they apparently do not do so in most cases unless potential risks are involved, such as defendants affiliated with a gang.