Study: Salt level in ancient lake on Mars suitable for life to survive 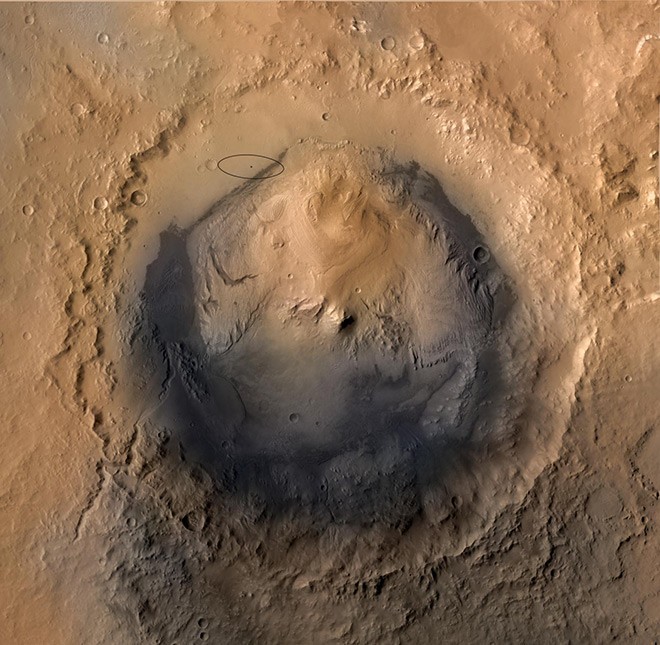 A lake is believed to have existed inside Gale Crater, located near Mars' equator. (Provided by NASA)

The salinity of water in an ancient lake on Mars was as mild as miso soup, a finding that raises the chances of discovering traces of life on the red planet, a Japanese research team said.

“The acidity and salinity were not extremely high, meaning that conditions on the planet allowed living things to come into existence and survive, just as they once were on Earth,” said team member Keisuke Fukushi, an associate professor of environmental chemistry at Kanazawa University.

In the first study of its kind, the scientists primarily from Kanazawa University and the Tokyo Institute of Technology analyzed data from Mars samples collected by NASA’s rover Curiosity to measure what the Martian water quality would have been like.

The team announced its findings on Oct. 25.

Water has not been found on the surface of the planet, but water is believed to remain underground.

Traces of rivers indicate that a huge volume of water likely existed 3.5 billion to 4 billion years ago, when the climate on the planet was warmer.

But what the water on Mars was actually like is unknown.

Fukushi and his colleagues examined data from soil under the 150-kilometer-diameter Gale Crater, which is believed to have once been a large lake.

Based on X-ray analysis data, the researchers studied the type of ion contained in a clay mineral known as smectite in the soil. From those results, they could estimate the water quality in ancient times on Mars.

The study showed that the salt content of water in the Martian lake was about 30 percent of seawater on Earth. That ratio indicates the salinity was as low as the ratio in miso soup or ramen broth, they said.

The water also contained substantial amounts of magnesium, calcium and other elements essential for creatures to survive, which were comparable to seawater on Earth, while the pH level is estimated to have been neutral.

The Martian water quality is similar to that in salt lakes in arid zones, such as Mongolia, according to the team.

No rivers appear to have run out of the ancient lake. So the salt and mineral ratios in the water likely increased when the water evaporated over a period of 1 million years, the scientists said.

Fukushi said he will study how widely areas with favorable living conditions spread on Mars and hopes to find out what caused the sudden environmental change on the planet.

The team’s findings have been published in the British scientific journal Nature Communications.