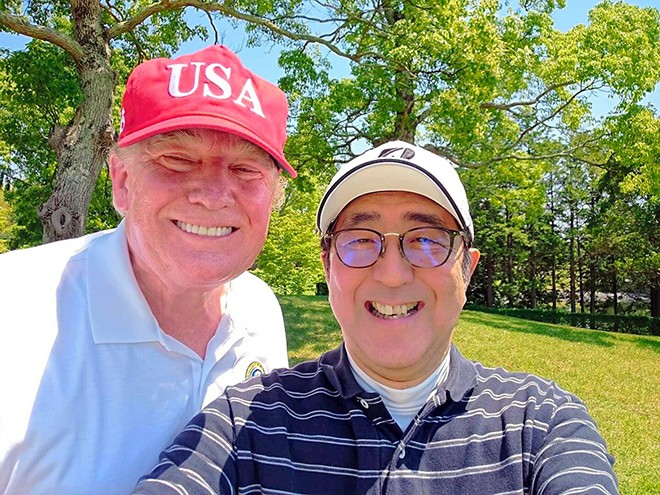 A selfie taken by Prime Minister Shinzo Abe during a round of golf with U.S. President Donald Trump in May (Captured from the Twitter account of the prime minister's office)

The Board of Audit’s scrutiny of the government’s books has revealed serious problems with the way Japan’s arms purchases from the United States are made and paid for along with a wide range of wasteful spending and flaws in public funds management.

Under the FMS, Japan is required to pay in advance for its arms purchases according to estimates made by the United States. The payments are later adjusted after the deliveries of the weapons and other items purchased.

The amounts of advance payments tend to be set high by the United States, which is in a superior position in arms trade.

According to the audit report, there were 85 cases in which a purchase had not been delivered by the deadline as of the end of March 2018. The total value of these yet-to-be-delivered items was 34.9 billion yen ($319.7 million). There were also 568 cases in which the payments had not yet been adjusted due to such reasons as that the final invoices had not arrived yet.

The total of these payments was 106.8 billion yen. Almost half of these cases concerned purchases that had been delivered two or more years previously including eight cases in which the payments had not been adjusted for more than 10 years. Adjustments of payments under the FMS program are supposed to be settled, in principle, within two years after the deliveries.

While weapons are no ordinary products, their prices should be reasonable as long as they are purchased with taxpayer money. Deliveries and adjustments of payments should be made without delay.

In reality, however, the U.S. interests are given priority at the cost of Japan.

Such unfair deals only create distrust among the Japanese public.

The Board of Audit pointed out similar problems in the past, but the situation has not been improved. The value of purchases that had not been delivered by the deadlines was about twice as large as the figures for fiscal 2013–2016.

There was even a case where electronic equipment for a fighter jet was not delivered on schedule and had to be substituted with the equipment for another aircraft under maintenance. And one in which the Defense Ministry failed to cancel the order for an item even after the ministry was told by the United States that the production of the item had been terminated.

The Board of Audit report also shows the ministry has no agreement with the United States over an exemption of a contract management fee, which charges 1.2 percent of the total procurement cost under the FMS transactions. Some 20 countries have agreements with the United States on cuts in the fee. France, for example, enjoys a total exemption, while South Korea and Australia have won a 0.5 percentage point cut in the rate.

The Defense Ministry claims such an agreement is not necessarily beneficial for Japan depending on the terms of the agreement. But it is the ministry’s job to negotiate a deal that serves Japan’s interests. The Board of Audit has rightfully called on the ministry to rethink its current stance.

The Abe administration has placed a premium on enhancing Japan’s defense capabilities through cooperation with the U.S. administration of President Donald Trump, which has been going all out to sell more arms to Japan and other U.S. allies.

Under the Abe administration’s defense policy agenda, Japan’s expenditures for FMS purchases have grown sharply, from 190.6 billion yen under the fiscal 2014 budget to 410.2 billion yen under the spending plan for fiscal 2018, which contains outlays for such costly weapons as F-35 stealth fighter jets and Osprey transport aircraft.

The amount surged further to 701.3 billion yen under the fiscal 2019 budget, which also pays for Aegis Ashore missile defense systems.

The government says it has called on Washington to lower the prices of U.S. weapons Japan buys and ensure quick deliveries through bilateral meetings of top defense officials and at other occasions.

But there is little hope for a fundamental solution to the problems under the current system.

While rigorously reassessing what kind of weapons and other defense equipment Japan really needs, the government should work with the more than 100 other countries that buy weapons from the United States under the FMS program to put pressure on Washington to take steps to fix the problems.