Portable ‘onsen’ spa facility from Beppu comes to your door 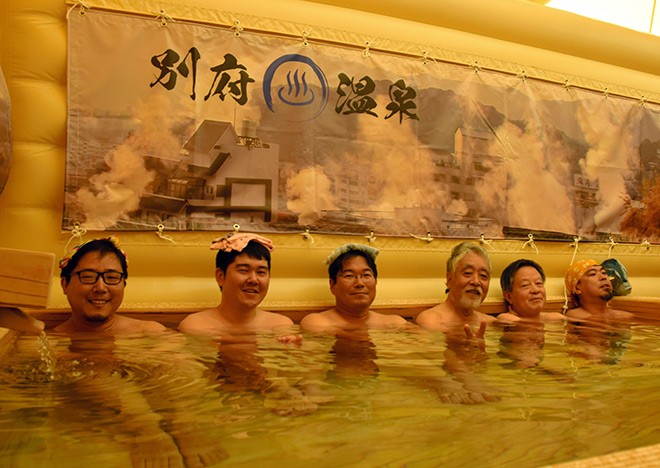 BEPPU, Oita Prefecture--For those desperate to sample Beppu's "onsen" bathing but don't have time to make the journey, a portable hot spring facility may be just the thing.

The movable onsen was shown to the public in this famed hot spring resort on Nov. 9.

It consists of bathtubs and dressing rooms inside a plastic tent, which can be inflated with a fan. All the water is pumped from a hot spring source within the city.

The service is offered anywhere in Japan, but it comes at a price. The fee for using the facility, including transportation costs, is about 500,000 yen ($4,600) in the Kyushu region, and between 1 million yen and 2 million yen in the Tokyo metropolitan area.

The Beppu city government paid 13 million yen for its production. Operations are managed by the city-affiliated organization B-biz LINK.

The tent measures 10 meters by 10 meters and is 6.4 meters high. A truck with a tank that keeps the water at toasty temperatures parks besides the tent. It can provide about 10 tons of water per day to the male and female bathtubs without recycling.

The bathtubs are made of fiber-reinforced plastic, and can accommodate four or five adults. There is enough water for five to six hours of continuous use, which means about 300 bathers can take advantage of the service a day.

On the day of the promotional event, about 90 people took a dip in the hot spring facility, named “Genso no Yu (Hot spring of illusion)” because it resembles a makeshift castle.

Yuta Ono, 28, a company employee in Beppu, was among the first persons to try it out.

“It's bigger than I thought, and the water is good,” he said. “This facility will be a boon for people who can’t come to Beppu but want to enjoy hot spring bathing.”

Beppu Mayor Yasuhiro Nagano said the city hoped the service could be offered in areas where a natural disaster strikes.

An official of B-biz LINK said, “It would be something if this facility was used in unlikely places like the fifth station on Mount Fuji or at a World Heritage site.”

The facility will feature at an event to be held at Tokyo Tower on Nov. 23.