Newly found early work of Jakuchu to be shown in Kyoto 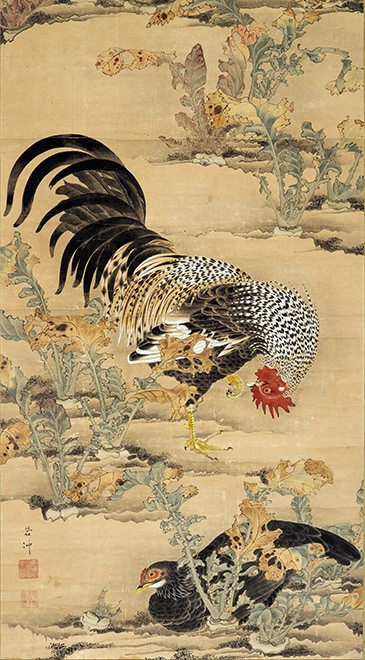 “Kabu ni Sokeizu"(Rooster and Hen with Turnips) has been confirmed to be a work of Edo Period artist Ito Jakuchu. (Provided by the Fukuda Art Museum)

KYOTO--A painting long kept in a home in the Kansai region has been confirmed to have been a work of famed Edo Period artist Ito Jakuchu (1716-1800).

The painting, which is believed to be an early work of Jakuchu, was bought by the Fukuda Art Museum here. The museum will restore the work and display it from March.

The painting, which was handed down from the former owner’s ancestors, has been named, “Kabu ni Sokeizu" (Rooster and Hen with Turnips).

A rooster, a hen and planted turnips were drawn on washi, Japanese paper, with sumi ink and mineral pigments.

It is a hanging scroll, with the drawn portion 111 centimeters tall and 69 cm wide.

Jakuchu, who was active in Kyoto, is known for his paintings depicting flowers, roosters and hens.

In April, the painting's former owner consulted the museum.

The museum’s chief curator, Hideyuki Okada, as well as Nobuo Tsuji and Motoaki Kono, who are professors emeritus at the University of Tokyo, studied the artwork and judged that it was an authentic Jakuchu work from the style and the seal.

According to Okada, some of Jakuchu's trademarks include being detailed and decorative, which can be seen in the depiction of portions around the birds’ necks and the turnip leaves.

However, some of the expressions made Okada sense the inexperience of the artist.

“The painting is probably an early work done in his 30s,” Okada said.

"Kabu ni Sokeizu" is scheduled to be displayed at the "Birth of Jakuchu" exhibition from March 20.