Black-and-white footage taken in November 1928 shows various events related to the enthronement ceremony for Emperor Hirohito held in Kyoto as well as the public reaction to the auspicious event. (Film taken by Japan Telegraphic Communication Co.) 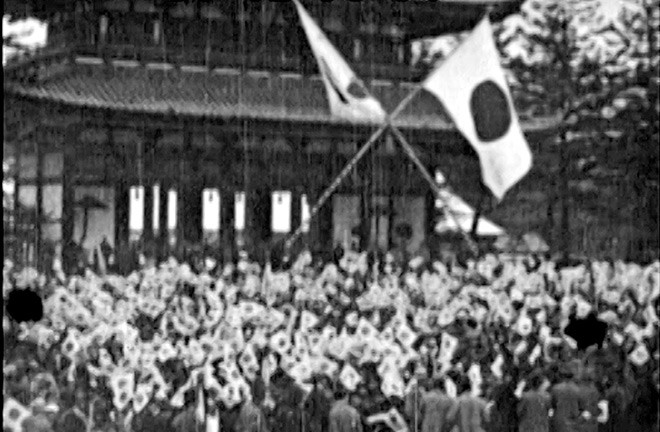 Rare film footage taken close to a century ago and found in Ikeda, Osaka Prefecture, is hardly a typical home movie.

It depicts various events held in Kyoto in November 1928 for the enthronement of Emperor Hirohito, who died in 1989 and is known posthumously as Emperor Showa.

When Hirohito ascended the Chrysanthemum Throne, all the important events were held in Kyoto, the ancient capital.

Hirohito's son, Emperor Emeritus Akihito, had his enthronement events at the Imperial Palace in Tokyo, as did his successor, Emperor Naruhito.

The film was taken and produced by Japan Telegraphic Communication Co., the predecessor of advertising giant Dentsu Inc.

The silent black-and-white film footage covers various events held at the Kyoto Imperial Palace and elsewhere, but not those held within the inner sanctum of the palace, such as the Daijosai ceremony.

Hirohito and Empress Nagako are seen entering the palace in a horse-drawn carriage. Other participants are dressed in traditional attire. There are also scenes of the public celebrating the enthronement by waving Hinomaru national flags.

Four reels, each one containing four minutes of footage, were found by Tsutomu Nishimura, 70, of Ikeda among 22 reels left by his grandfather.

Believing some of the film might be very important, Nishimura consulted with the Kiroku Eiga Hozon Center in Tokyo, which preserves and restores old movies and film.

As center staff were in the process of digitalizing the film brought in by Nishimura, they came across the footage of the enthronement ceremony events.

The film has been donated to the National Film Archive of Japan and is being kept in a special temperature- and humidity-controlled storage room.

Similar footage has not been found in any companies of the Dentsu group or with the National Film Archive.

Hideyo Murayama, director of the Kiroku Eiga Hozon Center, said, "All film taken before the end of World War II are valuable historical records, even if there are only home movies. I hope those who have such film will consult with us because film deteriorates if kept at room temperature."