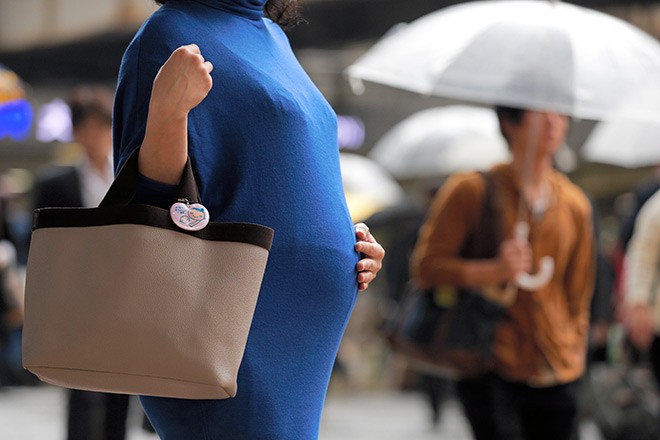 A pregnant woman has a maternity mark badge fastened to her bag in Osaka. (Asahi Shimbun file photo)

Women are more likely to have underdeveloped fetuses if they continue to work long hours and night shifts during pregnancy, according to a nationwide survey.

The survey, conducted by Nagoya City University and the Environment Ministry, also said the women are at greater risk of developing hypertensive disorders from pregnancy.

The results from the Japan Environment and Children’s study were published in the U.S. obstetrics journal Birth on Oct. 31.

The survey covered about 100,000 pregnant women around Japan. A research team collected data on the number of hours they worked and their night shifts. It also noted the physical conditions of the women and their babies up until delivery and the methods of delivery.

Pregnant women who worked night shifts once to five times a month and 36 to 45 hours a week in the second and third trimesters had a 1.56 times higher risk of developing mild hypertensive disorders than those who didn't work, regardless of their age, smoking status or alcohol use.

The risk for those working 46 hours or more per week is particularly high, roughly twice that for those who didn't work.

Those who worked 46 hours or more a week and night shifts once to six times a month in the first trimester had an approximately 1.3 times higher risk of having an underdeveloped fetus, compared to those who didn't work.

Those who worked 36 hours or more per week during pregnancy were also more likely to need to deliver their child using forceps, vacuum extraction or other methods that require medical instruments.

“More women are continuing to work after they get married and even during pregnancy, but they should avoid working long hours for their child’s health and a safer delivery,” said Nobuhiro Suzumori, a member of the team and a physician of the Department of Obstetrics and Gynecology at Nagoya City University Hospital.