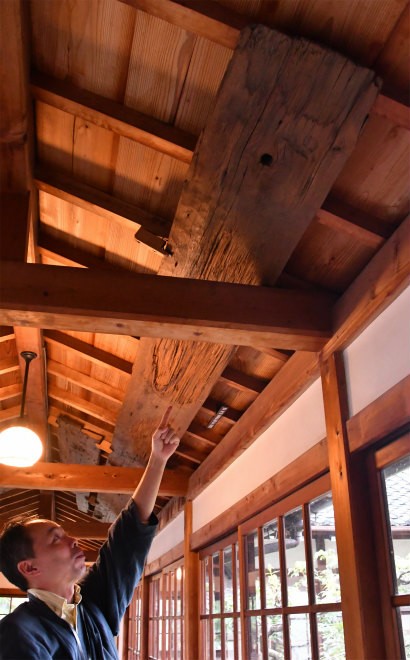 A wooden beam from a Japanese cypress tree felled in 1046 is stored in the ceiling area of a minor Jodoin structure in the Byodoin temple complex in Uji, Kyoto Prefecture. Photo was taken on Oct. 18. (Taku Koyama)

UJI, Kyoto Prefecture--Wooden beams used in the construction of Byodoin temple's breathtaking Phoenix Hall, a World Heritage site, turn out to have been felled and fashioned years before the site was finished, research shows.

The finding offers significant clues to what the structure initially looked like, experts said.

An analysis of growth rings in two roof timbers removed and stored during maintenance work over the past 150 years or so, showed that they are from trees felled in 1046, seven years before the structure’s establishment, and 1047, respectively.

“In those days, timber was used in temple construction two to three years after the trees were chopped down, which suggests Byodoin was built to a special grand design,” said Takumi Mitsutani, a visiting fellow at the Nara National Research Institute for Cultural Properties in Nara.

In 2016, Mitsutani examined changes in the width of the growth rings just beneath the bark to determine the age of the timbers.

According to an Oct. 18 announcement by Byodoin, the study revealed that a 5.6-meter-long wooden beam removed during repair work in the Meiji Era (1868-1912) and stored in the grounds of the complex in a minor temple known as Jodoin, was cut down in 1046.

Another timber detached during maintenance work in the Showa Era (1926-1989) turned out to have been from a tree felled in 1047. Both beams are Japanese cypress.

Yoshihiro Narumi, an expert in preserving buildings designated as cultural properties, said the finding could “provide extremely important clues to the roof design at the time of its founding.”

Two theories have recently been put forward by researchers as to what the cavernous roof of the Phoenix Hall initially looked like.

Some experts insist the entire roof was covered by ordinary tiles, while others argue wooden slats were used.

As the timber dating to 1046 is believed to have been placed under the hall’s roof and has holes where nails were hammered in, Byodoin is trying to figure out precisely where the beam was originally placed below the roof.