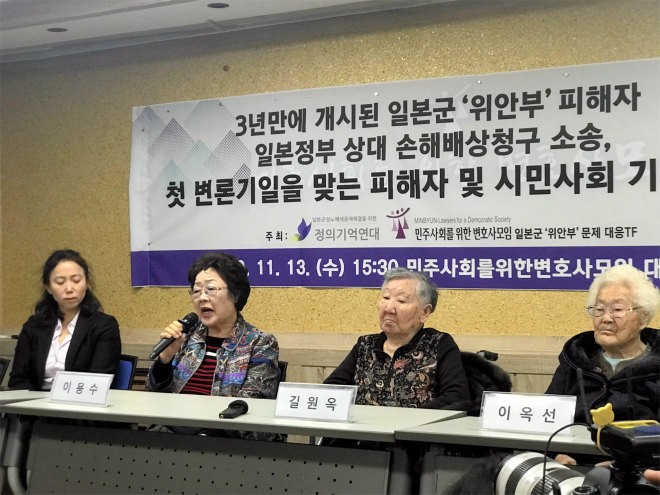 SEOUL--A Seoul court on Nov. 13 began hearing a lawsuit by former "comfort women" seeking a combined 3 billion won (280 million yen, or $2.6 million) from the Japanese government in compensation for their ordeal.

No lawyers were on hand to represent Tokyo. The government refuses to take part in the case on grounds its sovereign immunity under international law means it cannot face a trial in a foreign nation.

The Seoul Central District Court made no judgment on whether it would invoke state immunity for Japan, but only set the next court hearing for Feb. 5.

The judge pressed their lawyers to offer convincing arguments, saying the plaintiffs faced a major hurdle in terms of state immunity in order to push their lawsuit forward.

In stating their case, the lawyers for the plaintiffs said the human rights violations experienced by the women should not be subject to state immunity. They further argued that the concept did not intrude upon the rights of the plaintiffs to submit the lawsuit.

They added that the issue of comfort women forced to provide sex to Japanese military personnel before and during World War II was well-known in the international community.

The lawyers plan to call international law experts to the court as witnesses.

The lawsuit was originally filed in December 2016 when Park Geun-hye was South Korea's president.

The government used state immunity as its rationale for refusing to accept the lawsuit.

But this spring, the district court in Seoul indicated it would begin trial proceedings. That prompted Tokyo to inform officials in Seoul that the South Korean government was obliged to reject the lawsuit.

After the hearing closed, Lee spoke with reporters and said: "I cannot understand why the Japanese government did not appear in court. I will seek an apology and compensation until the very end."

Japan asserts that all matters involving compensation for issues stemming from Japan's 1910-1945 annexation of the Korean Peninsula were settled by a 1965 treaty that restored diplomatic relations between the two countries.