SDF carries out amphibious exercise to keep China in check 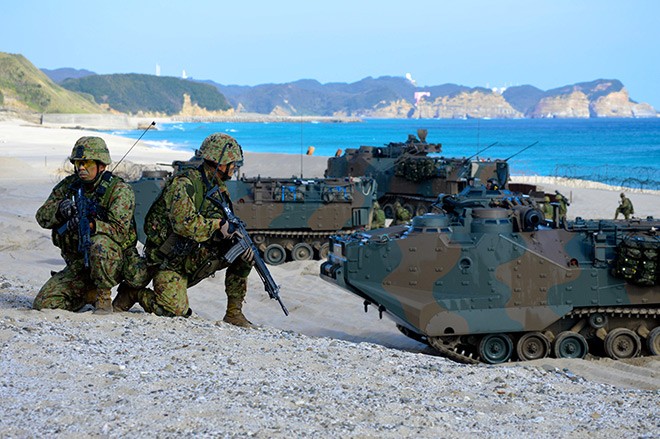 Members of the Ground Self-Defense Force participate in a drill to take back a remote island from enemies using amphibious vehicles in Tanegashima island, Kagoshima Prefecture, on Nov. 14. (Naotaka Fujita)

TANEGASHIMA ISLAND, Kagoshima Prefecture--With enemy forces having landed on Tanegashima island, the Maritime Self-Defense Force's largest destroyer, the Kaga, along with two transport vessels, take up positions off the coast.

Ground SDF assault amphibious vehicles (AAV7) exit in succession from a large door in the rear of the Kunisaki transport vessel and splash into the ocean, before advancing toward the island.

After landing on the beach in the southern part of Tanegashima, the SDF troops take control of the enemy.

The exercise on Nov. 14 was one of the SDF's largest drills to protect remote islands if they come under attack.

It was conducted under a scenario that an amphibious mobile division that was newly established last year within the GSDF successfully repels enemies who have landed on Tanegashima.

The SDF carried out the drill in accordance with its stepped-up commitment to “amphibious operation capabilities” presented in the National Defense Program Guidelines released in December 2018.

“If the enemy occupies (the island) even temporarily, we will regain the land and remove the enemy by all means necessary,” said Rear Adm. Tsutomu Shirane of the MSDF, who led the Nov. 14 drill. “In order to do that, a joint operation of the Ground, Maritime and Air SDFs is important. The drill is highly significant."

The drill is part of the SDF’s joint exercises, which started on Nov. 11, and continues until Nov. 21 in various parts of the country. The SDF opened the exercises on Nov. 14 to the media.

About 1,500 personnel from the Ground, Maritime and Air SDFs participated in the joint amphibious exercise.

The Kaga is expected to assume a central role of command and control on the front lines in times of an actual emergency, according to SDF officials.

Looming large in the background of the exercise are China's maritime advances.

In the region of the Nansei islands, it has become common to see Chinese warships navigating between the main island of Okinawa and Miyakojima island.

In the Senkaku islands and the surrounding area, Chinese patrol vessels have repeatedly intruded in Japanese territorial waters.