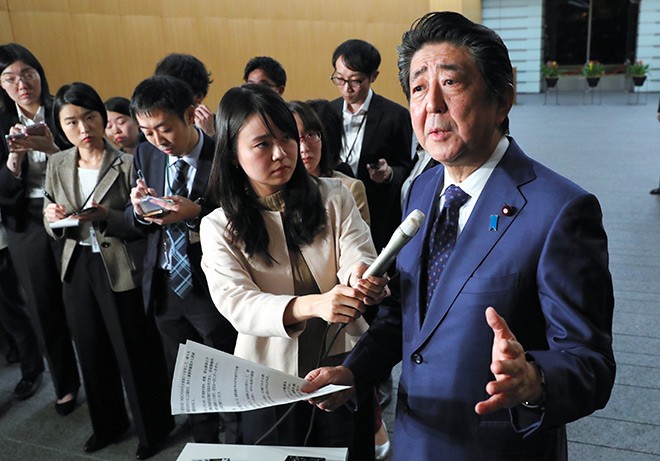 Prime Minister Shinzo Abe takes questions from reporters who waited for him at the entrance to the prime minister’s office in Tokyo on Nov. 15, 2019. (Asahi Shimbun file photo)

Prime Minister Shinzo Abe moved to silence his critics late Nov. 15 by uncharacteristically engaging in a lengthy Q&A session with reporters eager to get to the bottom of yet another scandal.

At issue is a cherry blossom gathering he hosted in a posh part of Tokyo that is under scrutiny over allegations that many of his supporters were invited from his electoral district in Yamaguchi Prefecture at the expense of taxpayers.

Opposition parties have accused Abe of using the event for personal gain.

Abe also faces allegations that his office and supporter’s organization might have breached the Political Offices Election Law and Political Funds Control Law by possibly funding a socializing party for those supporters held at the Hotel New Otani, a luxury hotel in the capital’s Chiyoda Ward, the night before the cherry viewing, that he attended with his wife.

Each participant reportedly paid only 5,000 yen ($46) to attend the party, which opposition parties contend was a steal, given that the rate for such gatherings at the New Otani is at least 11,000 yen.

Compounding the issue is the fact that political funding reports submitted by Abe's political organizations did not list any costs related to the party.

In reply to mounting calls for explanation, Abe spent more than 20 minutes answering questions from reporters on Nov. 15.

He denied any wrongdoing, clearly intent on closing the curtain on the scandal as quickly as possible.

“All the costs, such as the fee to attend the party and travel and hotel expenses, were financed by each participant,” Abe stated, adding that his office and his supporters’ organization played no role in covering those outlays.

He said the New Otani's management decided on the 5,000 yen fee after taking into account that most of the participants stayed the night in the hotel.

But opposition parties, as well as experts on the issue of political funds, remain far from being persuaded by Abe's explanation, saying he offered no evidence to back up his claims.

They are demanding that evidence be presented at Diet sessions.

“The prime minister simply issued a verbal denial," noted Tomoaki Iwai, a professor of politics at Nihon University. “That does not amount to uncovering the facts.”

Abe's meeting with reporters marked the first time he has touched on the cherry blossom viewing and related events after he told a Diet session he “was not involved” in choosing invitees on Nov. 8.

It was later learned that his supporters were notified by his office about a sightseeing tour to Tokyo, including the cherry blossom viewing. That was when the function at the Hotel New Otani came to light.

In response to attacks from the opposition camp that Abe exploits the annual cherry blossom event for his own benefit, the government suspended plans to hold one next year and pledged to review the process for selecting invitees to the viewing.

The tax-funded cherry viewing, a tradition since 1952, is supposed to be held for those who are accomplished in various fields.

The number of invited guests mushroomed after Abe returned to power in late 2012. Many supporters from his home constituency were routinely invited.

Although Abe vowed to deeply reflect on the circumstances surrounding the event, he refused to promise to explain matters in detail at Budget Committee meetings in the Diet, as demanded by the opposition bloc.

“It is impossible for the prime minister to appear before Budget Committee meetings because he is certain to become a target,” said a senior lawmaker of Abe’s Liberal Democratic Party, noting the seriousness of his quandary.

Opposition parties, including the Constitutional Democratic Party of Japan and the Japanese Communist Party, formed a united front to pursue the issue by agreeing to set up a joint task force. On Nov. 15, task force members handed Abe’s office an open letter listing 10 questions for him to answer, before the prime minister took questions from reporters.

The letter sought to ascertain the number of people invited by Abe's office to this year's cherry viewing event in April and whether Abe’s office gave any consideration to whether invitees merited such attention on the basis of their achievements and contributions.

But Abe did not address these questions when he met reporters later that day.

Also, no explanation was forthcoming to the fact the party was not listed in political funding reports submitted by political organizations related to Abe and outrageously inexpensive attendance fee.

Aside from shying away from saying how many people were invited, Abe did not mention how much the function cost overall, including food and setting up.

This is bound to leave lingering doubts among the public, according to Iwai of Nihon University.

“The calculations and the balance sheets compiled by the hotel should be presented to public,” Iwai said. He also called for detailed information on the profit margin for the hotel after it subtracted expenses for the gathering.

Akira Koike, secretary-general of the JCP, contended that Abe simply added fuel to the fire by not giving a full account.

“Who can be persuaded by his explanation? Once again, he has pinned the blame on somebody else, this time the hotel, instead of bureaucrats,” he said, referring to parallel scandals involving the Moritomo and Kake educational institutions.

The opposition has made little progress in uncovering new facts, based partly on the fact the Cabinet Office and Cabinet Secretariat refused to release a list of guests invited to the event, saying it has been already discarded.

Jun Azumi, chief of the CDPJ’s Diet Affairs Committee, said the opposition bloc will keep on pursuing the issue in light of the gaping chasm between Abe’s accounts and its understanding of the event and the party.