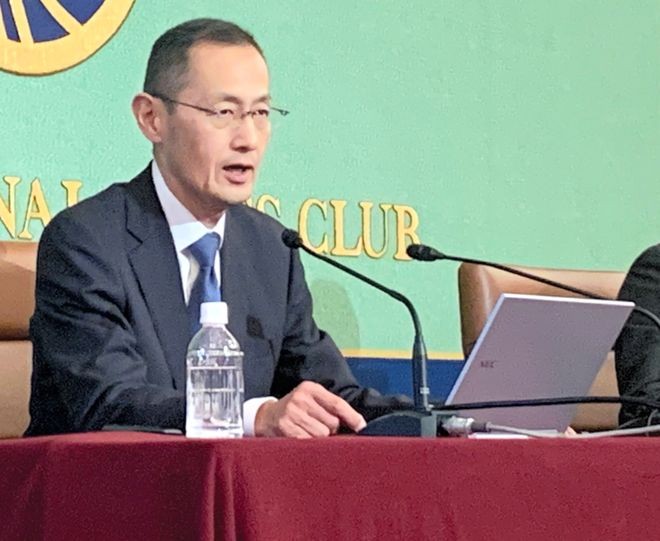 But the closer the practical application of iPS cells in medical fields nears, the more Yamanaka sees the possibility that funding for research and development of iPS cells will dry up.

Yamanaka, a professor at Kyoto University and director of the university’s Center for iPS Cell Research and Application (CiRA), was notified by the government this summer that it will most likely discontinue the 1 billion yen ($9.2 million) in annual funding to the center’s iPS cell stock project from fiscal 2020.

However, Yamanaka told a news conference at the Japan National Press Club in Tokyo on Nov. 11 that it often takes a little more than 20 years for a new medical treatment to be established from its discovery.

Thirteen years have passed since the discovery of iPS cells, and the research-and-development process has reached a transitional period from basic research to commercialization.

This is when support for “bridgebuilding from academia to companies that handle iPS cells’ application to medical treatment in earnest” is much needed, Yamanaka said.

But government officials seem ready to pull funding for the project, while cost-conscious companies have different visions from researchers.

“An open panel of experts at the (science) ministry appraised the iPS cell stock project and decided to continue funding. Yet, some people have called for a halt for spending government money on the project,” Yamanaka said at the news conference.

He said the decision regarding future funding should be made through a “highly transparent discussion.”

Yamanaka won the Nobel Prize in Physiology or Medicine in 2012 for his creation of pluripotent stem cells.

Researchers and doctors dream about regenerative medicine, with which iPS cells created from patients’ own skin or blood can be transplanted into their retinas and cardiac muscles among others with no immune rejection.

It is a costly and time-consuming experiment, though. Creating iPS cells from a patient costs tens of millions of yen and takes several months. It may be too late for a patient with a life-threatening condition to be saved through this treatment.

In order to make a low-cost and short-term transplantation possible, the CiRA launched the iPS cell stock project to reserve multiple types of iPS cells in advance, similar to the blood donation system.

The project began in 2013 with a goal of covering 90 percent of Japanese people by stockpiling 140 types of iPS cells.

The government decided to support the project for 10 years, having spent 1.3 billion yen in fiscal 2018 and a total of more than 9 billion yen until now.

However, the project has faced challenges in finding donors of multiple types of stem cells. The supply of only four types have started so far.

The CiRA gave up the goal of stockpiling 140 types and shifted its focus on reserving the already stocked four types in addition to six types of genome-edited iPS cells to cover almost all Japanese.

But companies that develop cells for transplant from iPS cells have expressed reservations about using multiple types of stem cells. It is an expensive and lengthy process for the companies to ensure the safety of each type of cell for transplant, checking to ensure they will not turn cancerous and not be mixed with other types of cells.

With advancement of drugs to suppress the immune system, the companies have noted that using a single type of iPS cells in conjunction with immunosuppressant drugs to reduce rejection makes it easier for them to maintain their businesses.

Recently, researchers transplanted cells created from iPS cells into the eyes and nerves of patients with intractable diseases, which made the government aware that the research and development of iPS cells has entered a new phase of commercialization.

Officials of the Cabinet Secretariat who handle medical policy visited Kyoto University in the summer to tell Yamanaka about the funding cut, according to sources.

On the other hand, some government officials have proposed a gradual decrease of funding, rather than just cutting all of it at once.

Officials of the science ministry, which has promoted the research and development of iPS cells, have expressed the view that it is inevitable for the government to reduce support to the project.

In the meantime, Kyoto University has established a corporation to separate the iPS cell stock project from the university and make it possible to turn a profit by selling iPS cells. It has worked to raise money for the project as well.