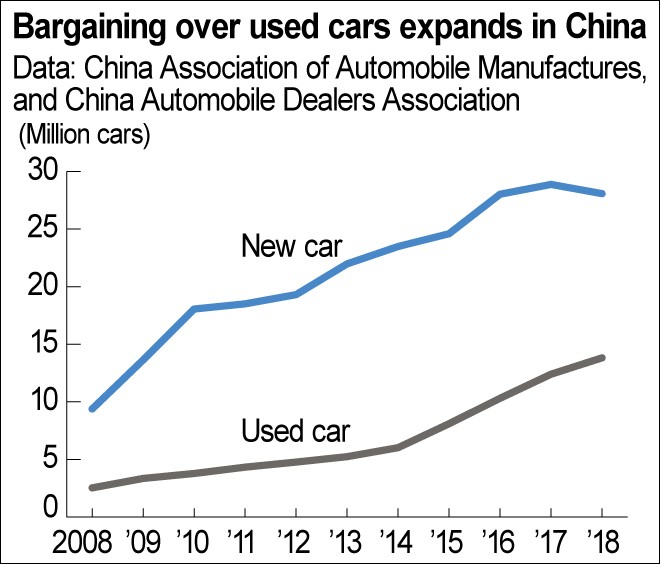 TIANJIN, China--Newly minted millionaires in China used to flaunt their wealth and status by purchasing a new car each year.

Now that the economy is not hitting the dizzying growth rates of yesteryear, China's new rich are keeping a tighter rein on their pocketbooks.

That, in turn, has translated into massive demand for used cars, so much so, in fact, that the sales growth of such vehicles now far outpaces that of new cars.

New car sales, once the engine of growth, have shown year-on-year losses for 16 consecutive months, reflecting the fact that the economic growth rate in the July to September quarter, was only 6.0 percent compared with the same period last year, the worst figure on record.

Customers might have tightened their pursue strings, but they still flock to a corner of Tianjin Port’s bonded area here, where imported used vehicles can be snapped up for a bargain.

The low price generates considerable interest among those wondering whether to purchase a luxury car.

The salesman specializes in parallel imports, which means he is able to bypass the official car dealers.

A study in China found that parallel car imports to China between January and July reached 100,000 units, a 16.5 percent increase compared with the same period a year before.

In contrast, new cars have not fared so well. New car sales in 2018 came to 28.08 million, a 2.8 percent decrease compared with the same period a year earlier and the first year-on-year loss in 28 years.

Sales between January and October of this year came to 20.65 million, a 9.7 percent decline compared with the same period a year earlier, suggesting a year-on-year loss for the second consecutive year.

Sales of secondhand vehicles are helping to offset the losses.

Sales of used cars in January were half that of new cars. But in July, the rate rose to 70 percent. Demand is spurred by the reasonable prices and knowledge that the latest in IT technology is employed.

At Uxin Used Car, prospective customers can watch assessment readings of a car's condition on an online screen with high definition CG before making a purchase. Cameras attached to an employee's eye glasses can record the assessment process.

“Transactions of secondhand cars become transparent because of digitalization, which makes customers feel comfortable about buying them,” said Xie Wei, a spokesperson of the Uxin Group, operator of Uxin Used Car.

Despite the popularity of secondhand cars and parallel imported cars, they contribute far less to the country’s economic growth compared with new cars, which is proving to be a headache for the Chinese government.

The relatively lackluster 6.2 percent economic growth rate between January and September was partly attributed to the fact that retail sales nationwide registered just an 8.2 percent increase.