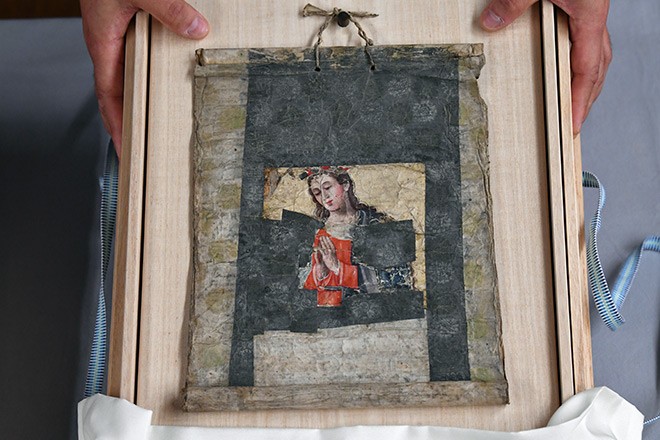 The restored scroll “Our Lady of the Snows” at Usami Shutokudo in Kyoto on Nov. 15 (Satoru Ogawa)

KYOTO--A hanging scroll of the Virgin Mary from the 17th century that hidden Christians in Nagasaki risked limb and life to preserve is ready to be displayed again after a delicate six-month restoration project.

Hopes are riding high that Pope Francis will view it when he visits Japan this weekend.

The painting, “Our Lady of the Snows,” is kept by the Twenty Six Martyrs Museum, a facility in Nagasaki dedicated to the history of Christianity in Japan.

The scroll, 28.1 centimeters long and 21.8 cm wide, is believed to have been created by a Japanese who studied under a Jesuit painter in Nagasaki and was secretly kept by believers through the years of persecution.

It is considered to be a shining example of 17th century religious art. The painting featured in “Silence,” Martin Scorsese’s 2016 film homage to Shusaku Endo's novel “Chinmoku.”

The artwork was showing its age with creases and cracks.

Naoharu Usami, president of Kyoto-based Usami Shutokudo, an artisan picture framer of traditional handcrafts, took up the challenge and spent about six months through October restoring the treasure.

Usami consulted museum staff and experts and decided to leave the dirty marks and many folds untouched. Parts were also pasted with beautifully crafted “karakami” paper.

He opted to use less-sticky glue and thin “washi” paper to strengthen damaged and cracked areas at the back, ever mindful not to change the feeling of the painting with his restoration.

Pope Francis is scheduled to visit Nagasaki on Nov. 24. The museum has high expectations the pope will drop by and see the painting in person.

The Society of Jesus Japan Province asked Usami to create a replica of the painting as a gift to the pope.

“It's a small painting, but hidden Christians risked their lives to protect it. I felt its solemnity, and I am so relieved the restoration is finished,” Usami said.

The Basilica of St. Mary Major in Rome sits on the site where, according to legend, there was an improbable snowfall in August.

In the mid-fourth century, it was said that the Virgin Mary revealed herself in a dream by stating, “I will make snow fall in summer, so build a church where the snow falls.”

Followers built the church accordingly. The day it snowed, Aug. 5, is now a holiday celebrating Our Lady of the Snows.

It is said that hidden Christians in Nagasaki also offered special prayers on that day.