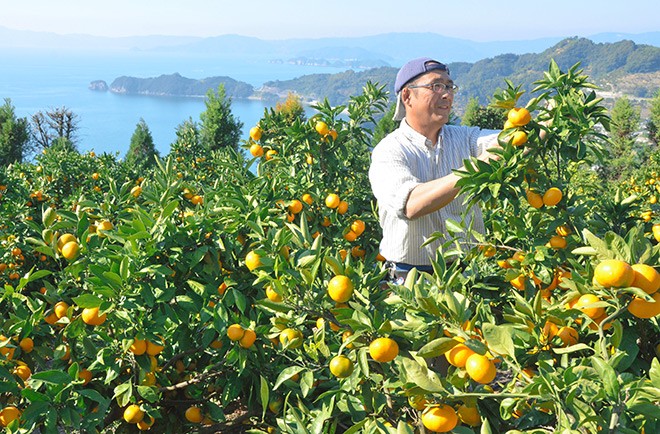 Locals say they have “three suns” in the coastal communities of Ehime Prefecture, one of Japan’s citrus-producing centers.

It means that in addition to the sun in the sky, there are its reflections on the Seto Inland Sea as well as on the stone walls of terraced fields.

Local “unshu mikan” mandarin oranges, basking in the plentiful sunshine, are in their peak harvest season.

In recent years, the blood orange, a variety with a signature red pulp, has been gaining prominence.

The strain indigenous to Italy, where the climate is warmer than Japan, is grown in and around Uwajima in southern Ehime Prefecture. Its harvests have increased dramatically over the last 10 years or so to 300 tons a year.

“A decade ago, they couldn’t survive the cold of Japanese winters,” said Hisao Inoue, 57, director of Mikan Kenkyujo, a prefectural research institute based in Uwajima.

Blood orange production began between the late 1960s and the early 1970s. The fruits were harvested before the arrival of the cold wave and stored until they ripened.

However, because of global warming they can now remain on trees through winter, and their taste has improved substantially.

The traditional unshu mikan, on the other hand, has become harder to grow.

Summer rains have become more intense, and the weather no longer gets cold enough in late autumn, resulting in increased cases of the skin detaching from the fruit as well as lower sugar content.

Coupled with the inexorable aging of local farmers, the prefecture’s harvest volume of unshu mikan has shrunk to less than 20 percent of the peak level of 610,000 tons a year.

Inoue showed me around the institute where citrus fruits of many kinds are grown.

The side of a mountain reveals massive erosion caused by the torrential rains that pummeled western Japan in summer last year. The skeletal remains of hothouses were sad to look at.

The oldest unshu mikan tree is pushing 100 years in age. Inoue offered me one mikan from the tree. It was delightfully sweet.

I noticed an avocado tree. I was told that Matsuyama, the capital of Ehime Prefecture, is promoting production of the fruit of Latin American origin.

Backed by their decades of history, farmers are coping with the changing climate. I prayed that their efforts will bear fruit, literally.