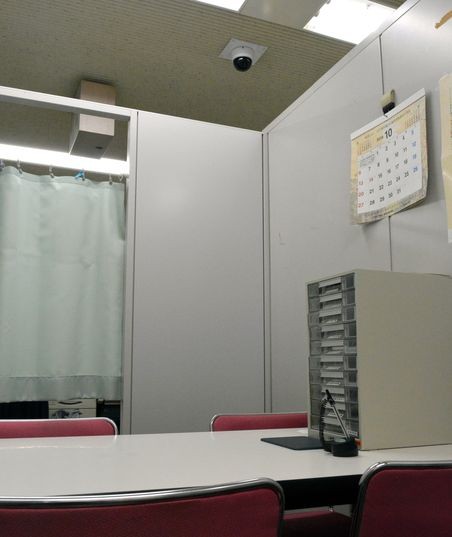 FUKUOKA--People who come to apply for welfare benefits or inquire about them at city ward offices here may have their consultations recorded on security cameras.

Since April, the Fukuoka city government has been installing the cameras in interview rooms at ward offices where citizens consult staff about the benefits.

A city representative said the step was taken “for the safety of citizens and staff.”

But Hidehiko Watanuki, a city assembly member of the Japanese Communist Party, said, “Recording only citizens coming to the welfare section could violate their human rights.”

There are currently no standardized rules for local governments on the use of security cameras.

So far, cameras have been set up on the ceilings of 10 interview rooms out of the 47 at seven ward offices here.

Each ward office has at least one interview room with a camera.

The city said it installed cameras because of past incidents that included staff being assaulted and threatened with a knife.

There were about 20 such incidents between April 2015 and September this year. Police were called to intervene in eight of them.

Fukuoka began considering installing cameras in December last year, but did not establish an ordinance that needs to be approved by the assembly.

A sign at the entrance of consultation rooms tells visitors, “Security cameras are installed,” but staff normally don't record meetings with visitors.

Interviews are recorded only when the section chief in charge judges it necessary, such as in a situation where the staff might be assaulted by a visitor.

The city's Higashi Ward office recorded five incidents from the day it started operating cameras until Oct. 25, according to the city’s welfare section.

In three cases, the office decided in advance to record meetings after it knew that people who might cause trouble would come there.

The office said it has not given any of its videos to police.

The city government said it is also “considering the issue of privacy carefully by limiting the number of staff members who are handling the recording equipment and the storage period of the footage.”

Security cameras have been installed at local government offices across the nation.

According to the Osaka city government, cameras were set up in interview rooms for welfare benefits at 18 of its 24 ward offices in Osaka.

At its Chuo Ward office, cameras have been installed on the ceilings near the front desk, as well as in interview rooms, since 2014. They are recording all the time, but the ward said it has never given footage from them to the police.

The ministry also admitted that it does not have a clear picture of how local governments across Japan are using the cameras.

Yasuhiko Tajima, a scholar of constitutional law, co-leads a group of citizens and other individuals that oppose a surveillance society.

Tajima said that though security cameras are installed to stop crimes, “singling out people as troublemakers and recording them is likely to offend those coming to talk about welfare benefits.

“Countermeasures should be considered more carefully, including other means, such as using security guards,” he added.