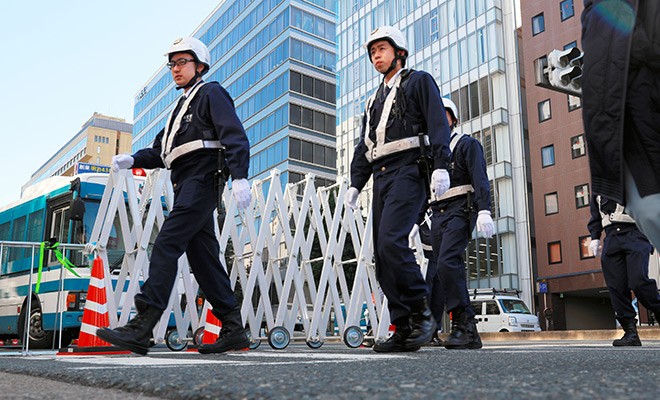 Police officers on guard Nov. 21 around the hotel in Nagoya’s Naka Ward that served as the venue for the Group of 20 foreign ministers’ meeting (Yoichi Kawatsu)

The papers apparently included details about the mobilization of police resources during the Nov. 22-23 event.

An investigation into the matter is to be held, and the officer in question will face a hearing.

According to police sources, the documents were distributed at an Oct. 29 closed-door meeting attended by about 200 police officers, including the prefectural police chief and police station chiefs.

Steps on protecting VIPs and traffic control procedures were explained at the meeting.

According to the sources, the police official went to dinner after the meeting and lost his bag with a complete set of the distributed documents on his way home.

Japan hosted the G-20 summit for the first time in June in Osaka.

The foreign ministers’ meeting in Nagoya was the final G-20 ministerial meeting. Foreign ministers of 20 member countries and regions attended, as well as those from nine guest countries.

Among other tasks, the prefectural police were on guard against terrorism while the meeting was under way.

About 8,500 police, including those from other prefectures, were mobilized for the event.

Traffic was strictly controlled around the venue in central Nagoya for four days from Nov. 21, a day before the meeting opened.

This was to ensure that delegates arrived and departed hassle-free.

Police called on the public to refrain from using their cars to reduce traffic volume by 45 percent.

“It is true that documents were lost, but no private information was included and this is not a matter that affected prefectural residents," said an official at the security department of the Aichi prefectural police. "We can’t comment on the documents' contents."