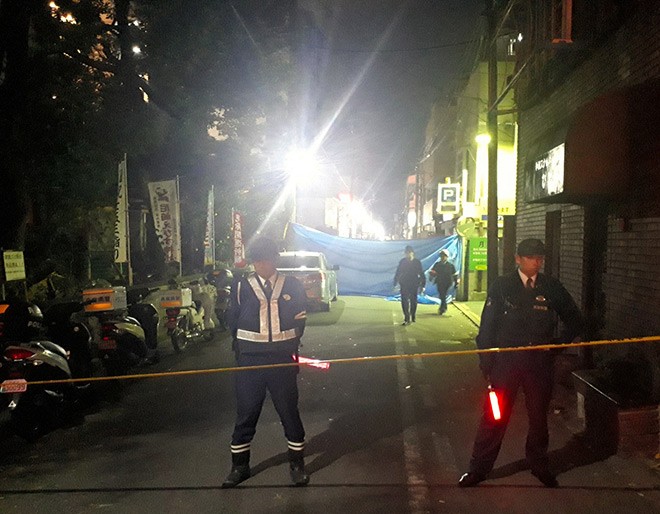 The crime scene where a high-ranking gang member was gunned down in Amagasaki, Hyogo Prefecture, on Nov. 27 (Kazuhiko Matsunaga)

KOBE--A senior member of a yakuza gang died after being gunned down on a busy downtown street on Nov. 27, the latest bloodshed in a long-standing feud among rival crime organizations, police said.

Keiichi Furukawa, a 59-year-old high-ranking member of the Kobe Yamaguchi-gumi, was shot repeatedly at 5:05 p.m. on a restaurant-lined street in the Kanda-Minami Dori area of Amagasaki, Hyogo Prefecture. He was pronounced dead at a hospital.

Kyoto prefectural police around 6 p.m. arrested Hisanori Asahina, 52, who has admitted to his involvement in the shooting, according to sources. Asahina, who has ties to the Yamaguchi-gumi, Japan’s largest crime syndicate, was found in Kyoto’s Minami Ward with an automatic rifle, a revolver and five live cartridges in his vehicle.

According to Hyogo prefectural police and other investigative sources, Furukawa was inside a restaurant run by a relative. He was taken outside by a man who then shot Furukawa in the head, neck, chest and both arms.

Police found about 20 spent cartridges at the scene, around 400 meters from Hanshin Amagasaki Station.

Witnesses said the shooter hopped into a minivehicle parked nearby and drove off, but they were able to see the license plate number.

Police found that Asahina, who is from Konan, Aichi Prefecture, had rented a minivehicle in Amagasaki a few days before the shooting, according to the sources.

After police tracked down Asahina in Kyoto, he was arrested over suspected weapons violations. Police plan to arrest him on suspicion of murder.

Asahina was on parole after he was indicted in August on charges of using illegal stimulants. He was scheduled to be sentenced on Nov. 29.

Furukawa, a resident of Amagasaki, had been attacked with a bat and other weapons in the same area of the city in March 2018 and in July this year.

In April 2017, some members of the Kobe Yamaguchi-gumi broke away from the group and formed an Amagasaki-based crime organization called Ninkyo Yamaguchi-gumi.

In August, a member of a gang under the Kodo-kai was shot in Kobe.

More recently, two members of the Yamaken-gumi were fatally shot in front of the gang’s office in Kobe’s Chuo Ward in October. The suspected shooter, who posed as a magazine writer, is a member of the Kodo-kai.