Crown Prince Fumihito looks at photos of a recent trip to Bhutan with his family at their residence ahead of his 54th birthday on Nov. 30. (Video footage provided by Imperial Household Agency) 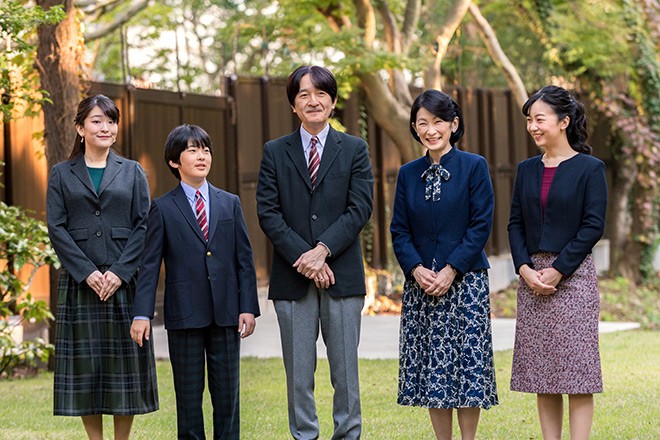 Crown Prince Fumihito expressed relief that his brother's imperial enthronement ceremonies went off without a hitch but reiterated his concern about the use of public funds to pay for events that are essentially religious in nature.

Fumihito spoke to reporters at his residence in Tokyo's Moto-Akasaka district to mark his 54th birthday, which fell Nov. 30.

He surprised many observers when he touched upon the Daijosai ceremony conducted as part of the enthronement of his older brother, Naruhito, at last year's news conference.

Naruhito ascended the Chrysanthemum Throne on May 1 following the abdication of his father, now Emperor Emeritus Akihito, and his enthronement rituals were recently completed.

"There are questions about the appropriateness of using state funds to pay for an event with a strong religious tone," Fumihito said last year. He added that expenses related to the ceremony should come from private funds allocated to imperial family members.

The most important ceremony, known as the Daijokyu-no-Gi that was held from the early evening of Nov. 14 and through the following morning, is steeped in Japan's mythological beginnings.

Fumihito himself observed the ceremony that involved Naruhito presenting rice harvested this year to imperial ancestors and deities, sampling the grain and praying for peace and an abundant harvest for the nation.

Government officials acknowledged the ceremony was religious in character, but decided the use of public funds was appropriate on grounds the Daijosai is an extremely important ritual within the traditional procedures used during an imperial ascension and is accepted as such by the public.

The tab for the enthronement rituals is expected to come to 2.44 billion yen ($22 million).

Fumihito was asked at this year's news conference if there had been any change in what he said last year.

"There has been no change to the thoughts that I expressed last year," he said.

He was also asked about his eldest daughter, Princess Mako, whose planned marriage to college classmate Kei Komuro has been postponed. The pair, both 28, studied at International Christian University and initially were expected to wed last November, but in February 2018 abruptly announced a change of plan and a two-year postponement.

This coming February will mark two years since that announcement, prompting Fumihito to remark, "There will be a need to make an announcement of some sort."

He admitted he had few opportunities to talk with Mako about her marriage plans and added that he had no contact with Komuro or his family.

At last year's news conference, when Fumihito was asked about Mako's then impending marriage he said it would not be possible to conduct the 'nosai-no-gi' ceremony that represents betrothal "until there is a situation in which many people will be convinced and express their happiness."

When asked about events over the past year that touched him, Fumihito referred to the countless victims of flooding and landslides caused by typhoons this autumn.

Referring to the fact that many areas flooded due to breaches in embankments, which had not been designated beforehand as zones where rivers might flood, Fumihito said, "There will be a need to think about how safely to evacuate people."

He also cited a fire in October that destroyed a large part of the Shuri-jo castle in Naha, Okinawa Prefecture, that he himself once visited.

"I was surprised and felt very disappointed at what happened," Fumihito said.

(This article was written by Tomoko Saito and Ayako Nakada.)