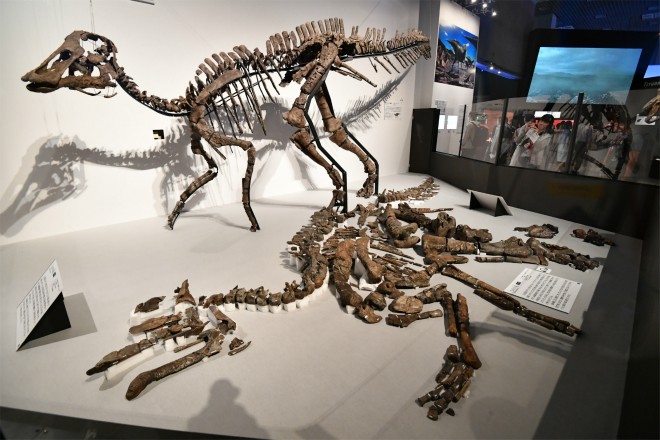 Dinosaur fossils unearthed in Mukawa, Hokkaido, are shown in front of a full model skeleton at Dinosaur Expo 2019 at the National Museum of Nature and Science in Tokyo. (Yosuke Fukudome)

A dinosaur named Mukawa-ryu is the centerpiece of "The Dinosaur Expo," a special exhibition running at the National Museum of Nature and Science in Tokyo's Ueno district.

The reptile's skeleton, of which more than 80 percent was excavated, makes it the only "full-bodied" specimen of its kind in Japan.

Every one of the shiny black fossils--the head, the vertebrae and so on--took my breath away.

The historic discovery is thanks to Yoshiyuki Horita, a 69-year-old fossil collector in the town of Mukawa in Hokkaido, who found a tail bone in the mountains near his home 16 years ago.

Horita initially assumed it came from a crocodile. But an expert later determined it to be a dinosaur bone, and the whole town joined in the excavation, digging up 222 fossils.

"I thought the discovery had to be a gift from the gods," Horita recalled.

A long-time postal worker, Horita was in his 30s when he started collecting fossils. He delighted his customers by gifting them with ammonites he dug up.

With a bandanna tied around his head and an ice ax in hand, he roamed the fields and mountains, chipping away at rocks of certain shapes and colors that appeared promising.

"The fossils were sending me signals," he said.

During the Cretaceous Period around 72 million years ago, Mukawa and its environs formed a sea, and herds of Mukawa-ryu dinosaurs fed on coastal vegetation. As they were gentle herbivores, they were often preyed on by such carnivores as the Tyrannosaurus rex.

The skeleton of Horita's Mukawa-ryu was displayed to the public for the first time on Sept. 4 last year at the town's sports center.

But just two days later, a strong earthquake struck the town, killing one person and destroying many homes.

In the neighboring town of Atsuma, landslides claimed many lives.

However, the dinosaur fossils were spared from destruction, as they were being kept at a local museum.

Sept. 6 marks one year since the quake. The town is in the process of promoting itself as the home of the Mukawa-ryu.

The dinosaur that roamed the Cretaceous land is contributing to the town's post-quake restoration effort.