Rakuten to start mobile service in October but only for lucky 5,000 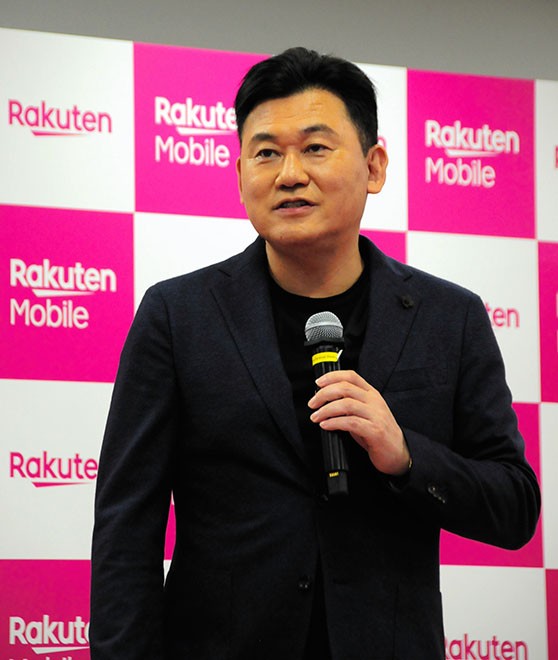 Hiroshi Mikitani, chairman and CEO of Rakuten Inc., discusses his company's roll-out of its new mobile business in Tokyo on Sept. 6. (Ryo Inoue)

Rakuten Inc. plans to launch its highly anticipated new mobile network carrier service in October as planned but only on a very limited basis for the first six months.

Full-fledged service will begin in spring 2020, six months behind the initial schedule.

To be eligible for the free service, users have to be 18 or older and a resident of one of the 23 wards in Tokyo, Osaka, Nagoya or Kobe.

Those users have to either sign a new contract with Rakuten or transfer from other mobile carriers to Rakuten.

The application period for the free service will start on Oct. 1 and end on Oct. 7.

In the event of too many applications, the company will hold a drawing for service allocation. The winners will be notified by e-mail starting from Oct. 11.

“Once we confirm the stability of the new network, we will start accepting applications online as soon as possible,” said Mikitani.

Mikitani added, “It might be one month later or by the end of this year,” suggesting a possibility of moving up the service launch date.

Rakuten plans to provide service using KDDI’s network in rural areas, while installing its own base stations in 3,432 locations in the metropolitan areas of Tokyo, Osaka and Nagoya, by the end of March 2020.

But work to install a new network has been behind schedule, and the company has received administrative guidance from the communications ministry three times through August.

Rakuten’s entry into the market as a mobile network operator is widely anticipated to trigger a price war. But with the announcement of a delay until the full launch, it will likely have only a limited effect on pricing for the time being.