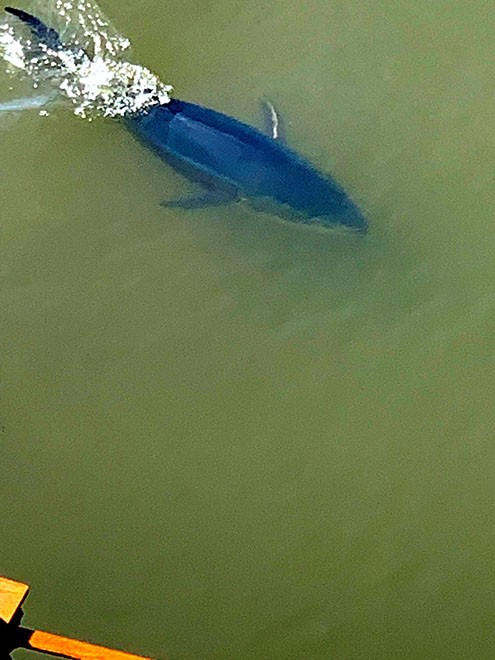 What appears to be a bluefin tuna swims in the Niidagawa river in Hachinohe, Aomori Prefecture, on Sept. 4. (Provided by a reader)

And it's not for the price it might fetch at an auction, but rather for the fact that it was seen swimming in a freshwater river, an unlikely place for such a saltwater denizen.

A clip of the tuna racked up 1.4 million views on Twitter and has been retweeted more than 15,000 times since it was posted by a 25-year-old woman who spotted the tuna around 1 p.m. on Sept. 4.

"I always glance at the river when I cross the bridge," she told The Asahi Shimbun. "I was stunned to see something so dark and big in the river.

"I realized it was a tuna when I zoomed in on the photo I had taken. I wonder why it was swimming in the river."

The marine creature was seen by other witnesses 3 to 4 kilometers up the Niidagawa river, which flows into the Pacific Ocean, between Sept. 4 and 5.

Kyosei Noro, who heads the fisheries research center at the Aomori prefectural industry technology center in Hiranai in the prefecture, said, "The fish is probably a bluefin tuna, because it has 'finlets' behind the back fin, a distinguishing feature of the species.

"During high-tide flooding, some seawater flows into the river around the outlet. The tuna may have strayed into the river from the ocean for some reason."

The fish was last seen at the site slightly closer to the outlet by a reporter as of the afternoon on Sept. 5.

(This article was written by Akari Nakagawa and Kuratoshi Yokoyama.)