Empress Masako all smiles during visit to Akita animal shelter 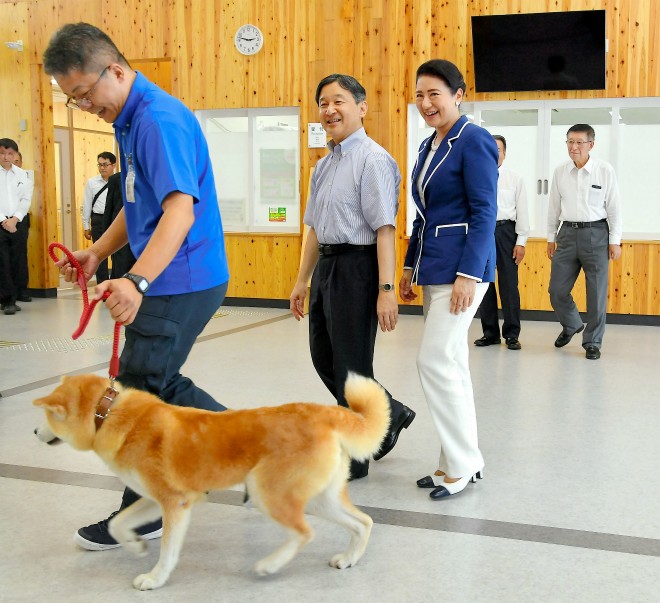 Emperor Naruhito and Empress Masako watch a staff member with an abandoned Akita Inu dog at the Akita prefectural animal shelter in Akita on Sept. 7. (Pool)

Masako also revealed that their family dog is involved in a charity activity, which was not known previously.

Emperor Naruhito and Masako were visiting the prefecture to attend an annual event, the Festival for the Cherished Sea, as part of their official duty to visit the countryside.

Their itinerary included a stop at the Akita prefectural animal protection center, where the couple energetically mingled with local residents and animals.

The shelter, which calls itself Wannyapia Akita, opened in the spring as part of efforts by the prefectural government to achieve a goal of not having to euthanize any stray dog or cat in Akita Prefecture.

So far, more than 150 dogs and cats that have been taken in at the facility have found new owners.

Naruhito and Masako interacted with dogs and cats at the center that have yet to be adopted.

They also observed children learning about the preciousness of life at a workshop offered by the center.

Komachi, an Akita Inu female dog that came under the shelter's protection in May, welcomed the couple on their visit.

Komachi is now being trained in preparation for a demonstration when a workshop on disciplining dogs is held.

Prefectural officials said some Akita Inus are abandoned by their owners after they participate in a dog show for the breed.

When the emperor and empress crouched down to pat Komachi, the dog happily put her head on Masako’s knee and licked her face.

Saying, “How adorable,” Masako was all smiles when Komachi was around.

The couple also participated in a workshop where local children are taught how to properly walk dogs.

At the beginning, the dog, which was kept on a leash, walked alongside the emperor. But the canine soon began scurrying briskly ahead as if it were pulling him, to the embarrassment of Naruhito, who grinned.

But Naruhito later found out why the dog was in a hurry: Miyo spotted its owner ahead.

“Miyo was eager to be reunited with its owner,” he said.

She called out to the dog in a caring voice, “Miyo-chan, let’s go,” before the pair began their stroll.

Miyo’s owner was marveled at how impeccably Masako handled the dog, saying, “She was perfect.”

The empress kept walking the dog while maintaining the same distance from the canine by controlling the leash.

The emperor and empress patted Miyo together with children around the couple and asked them if they had any dogs.

“We keep a Shiba Inu dog,” Naruhito said to them, pulling a picture of their dog, Yuri, out of a pocket of his trousers.

The imperial family took in Yuri in the spring of 2009 when the dog was about 2 months old. The female dog was seen in family photos and accompanies them when they travel to imperial villas.

It was during the visit to the animal shelter when Masako disclosed an activity involving Yuri that had not been previously made public.

When she chatted with volunteers at the center, one said her dog has been involved in activity to visit welfare facilities for the aged and hospices for 20 years.

After listening to the woman attentively, Masako said, “Our dog, too, takes part in such an activity. I am sure that people will be very happy when your dog visits.”

In a statement released on the night of Sept. 7 via the Imperial Household Agency, the couple summarized their visit to the center as an enjoyable one.

“We were impressed by the children who learned about the preciousness of lives while having fun,” the statement read. “We are hoping from the bottom of our hearts that the center’s programs will help reduce the number of animals that will be put down.”

On listening with a stethoscope to the heartbeat of a dog together with children, they described it as “louder than they had expected” as “conveying the dynamism of a living creature” in the statement.