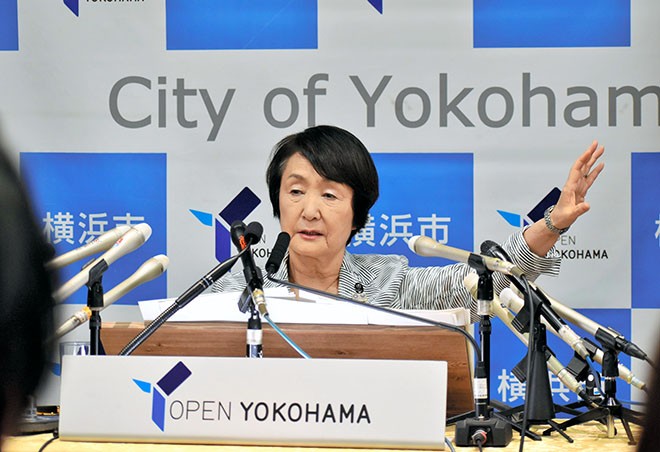 Yokohama Mayor Fumiko Hayashi on Aug. 22 suddenly declared that the port city will seek to host a casino-based resort that the central government plans to permit in up to three locations.

Hayashi was bombarded by questions about her announcement during a municipal assembly session last week. She offered some intriguing answers.

For instance, she said, “It is wrong to say all forms of gambling are evil,” and went on to talk about horse racing.

“Those who have seen horse races should know there are a tremendous number of people who have special feelings, such as gratitude, toward horses,” she said.

Did she mean casino gamblers should have “special feelings,” such as gratitude, toward roulette?

The mayor endured harsh questioning from assembly members over whether a casino could lead to a rise in gambling addiction.

Hayashi replied by saying Yokohama City University, which has a medical school, will play “a major role mainly in the medical area” in efforts to deal with the problem.

Did she mean the medical school will help cure people who have become addicted to gambling?

What she wants the city to have is not a simple casino but a so-called integrated resort (IR) featuring a casino.

A document on the plan prepared by the Yokohama municipal government includes an artistic rendering of the envisioned resort complex. As well as a casino, it features a theater, an art museum and even an aquarium

Hayashi used the graphics to stress that the IR would not simply be a casino but also a top-notch entertainment complex.

One assembly member asked her why it cannot be a resort complex without a casino. But such a resort facility would not be economically viable without a casino, according to the mayor. So, it should be an IR dependent on a casino.

The envisioned casino-centered IR would add up to 120 billion yen ($1.1 billion) to the city’s annual revenue, equivalent to 15 percent of its current tax receipts, according to the local government’s own estimate.

This seems to be a surefire recipe for making Yokohama dependent on money from a casino.

Hayashi says she made the decision to protect citizens’ “safe and secure livings” by offering adequate child care and health care support.

Imagine your own community relying on a casino to ensure high living standards.

Besides Yokohama, Osaka, Nagasaki and Wakayama have also announced their bids to be home to an IR.