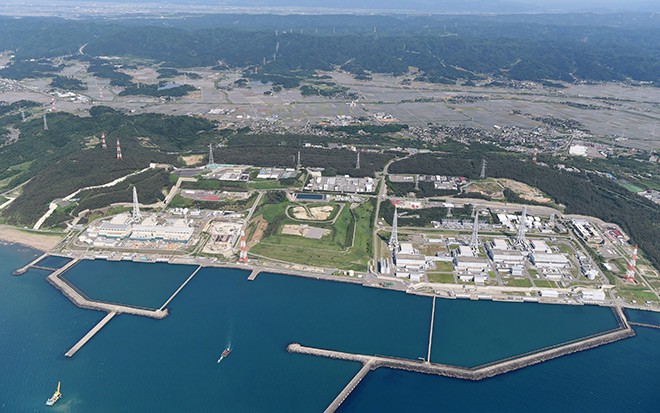 Tokyo Electric Power Co. has indicated it may decommission at least one aging idle reactor at its Kashiwazaki-Kariwa nuclear power plant in Niigata Prefecture if it can restart two new reactors at the site.

TEPCO said it will start taking “steps within five years" that could result in the decommissioning of one or more of the No. 1 to No. 5 reactors after two newer and more powerful reactors, the No. 6 and No. 7 reactors, are brought back on stream.

The company, operator of the disaster-stricken Fukushima No. 1 nuclear power plant, has been seeking to restart the two reactors after they passed safety screenings implemented by the Nuclear Regulation Authority.

Masahiro Sakurai, the mayor of Kashiwazaki, home to the seven-reactor plant, has demanded that the utility present a decommissioning plan for the other five reactors as a condition to agreeing to the restarts of the No. 6 and No. 7 reactors. TEPCO’s announcement was a response to Sakurai’s demand.

In touching on the possibility of decommissioning for the first time, TEPCO did not go into specifics. Instead, the utility's announcement seemed designed to put pressure on the city to allow the two reactors to be restarted as an initial step. That is a baffling attitude.

In 2017, when the NRA’s screenings of the No. 6 and No. 7 reactors were in the final stage, it emerged that TEPCO had failed to appropriately report and explain its findings of insufficient earthquake resistance of key facilities at the plant.

At that time, The Asahi Shimbun ran an editorial about the revelations and questioned the company’s qualifications to operate a nuclear plant. It also argued that the company should find a way to raise the necessary funds to pay compensation for damage caused by the nuclear disaster and cover the costs of decommissioning the reactors at the crippled plant without banking on any reactor restart.

In another public relations blunder this summer, TEPCO caused a scare in Niigata Prefecture by mistakenly reporting abnormalities at its Kashiwazaki-Kariwa nuclear plant after an earthquake struck the area on June 18. The company had to apologize.

Then came the utility’s latest announcement, which gave the impression that its plan to restart the two reactors was a foregone conclusion.

It is hardly surprising that the statement provoked a backlash among local residents who are leery of the utility.

The No. 2 to No. 4 reactors at the plant have remained offline for 12 years since the 2007 Niigata Chuetsu-oki Earthquake.

The oldest No. 1 reactor began operations in 1985, and is now just six years shy of the 40-year limit that in principle governs the operating life of nuclear reactors.

It is generally believed that restarting these reactors is a nonstarter.

There are reasons TEPCO still cannot promise to decommission these older reactors.

TEPCO, which was put under effective state control after its business became nonviable following the Fukushima nuclear accident, has worked with the government to map out a plan to rebuild itself. The plan calls for bringing the No. 1 to No. 5 reactors at the Kashiwazaki-Kariwa plant back on line one by one.

Restarting each reactor would save the company some 100 billion yen ($935 million) in annual fuel costs for thermal power operation. Moving in the direction of decommissioning these reactors could jeopardize the company’s vision for reconstruction, casting a pall over its future.

As a reason for leaving the door open to restarting the No. 1 to No. 5 reactors, TEPCO also cited a new legal provision to help curtail global warming. It requires a certain share of non-fossil power sources that do not emit greenhouse gases in generating electricity, such as nuclear power generation and renewable energy.

The company claims these five reactors are needed to achieve the goal, at least for now.

But TEPCO is grossly mistaken if it believes this policy justifies its move to press for local consent to its plan to restart the reactors.

Due to rising costs of required safety measures, a growing number of utilities have decided to decommission reactors that do not pay for themselves.

Clearly, there is a need to reconsider TEPCO's reconstruction plan from the viewpoint of the changing realities of nuclear power generation and review the proposed future shares of power sources.

The government should play the leading role in making a comprehensible judgement on TEPCO's nuclear operations and offer a convincing explanation to gain public support for its decision.

The outlook of TEPCO’s quest to resume operations of the No. 6 and No. 7 reactors will depend on whether it can win the support of Niigata Prefecture and the city of Kashiwazaki.

The decisions by the local communities concerned are, of course, important.

But the fact is that all nuclear plants in Japan, including those run by TEPCO, are operated by private-sector companies in line with the government’s policy to promote nuclear power.

The central government deserves to be criticized for acting extremely irresponsibly if it leaves the matter entirely in the hands of local governments.