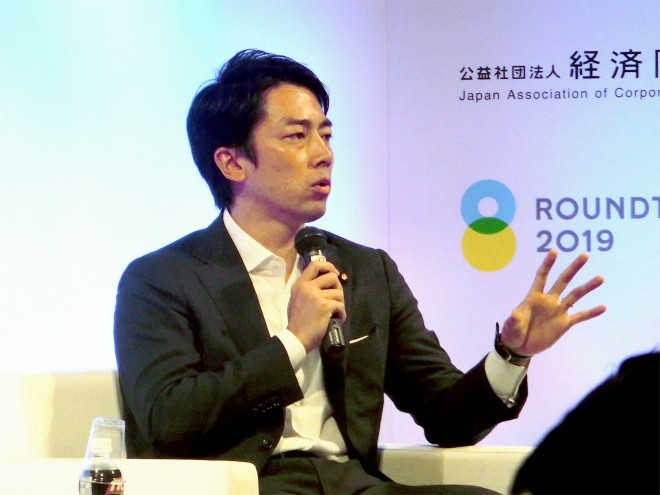 Shinjiro Koizumi, a Lower House member of the Liberal Democratic Party, expresses his thoughts on a dual surname system at an event in Tokyo on Sept. 9. (Sachiko Miwa)

Newlywed ruling party lawmaker Shinjiro Koizumi expressed support for married couples using separate surnames and said he and his wife would have done so if the climate had been more favorable.

Koizumi, 38, is a member of the Liberal Democratic Party. His father is former Prime Minister Junichiro Koizumi.

“(The proposal for introducing a dual surname system) is merely meant to give married couples a choice, but many people were opposed to it,” Koizumi said in a lecture he gave for a Tokyo event organized by Keizai Doyukai (Japan Association of Corporate Executives) on Sept. 9. “If couples want to share one surname, they can. My wife and I are both working. I am convinced now more than ever that my mission in life is to work to change our society.”

The Lower House member’s comment is at odds with his party's stance on the issue. The LDP remains reluctant to revise the Civil Law to allow married couples to have separate surnames in their family register.

In the Upper House election in July, Komeito, LDP’s junior coalition partner, as well as opposition parties such as the Constitutional Democratic Party of Japan, the Democratic Party for the People, the Japanese Communist Party and the Social Democratic Party, cited the introduction of a dual surname system as one of their campaign promises.

Prime Minister Shinzo Abe, who heads the LDP, refused to make his position clear when he and other leaders were asked about a possible switch to a dual surname system before official campaigning for the election kicked off.

Instead, the LDP recommends that the use of maiden names be accepted in workplaces and for official documents.

The Civil Law has a clause stipulating that married couples share the same surname.

More than 90 percent of women change their surnames after getting married.

With more women entering the work force, calls have been growing for a revision in the law to adopt a system allowing married couples to choose between sharing one surname or using separate ones.