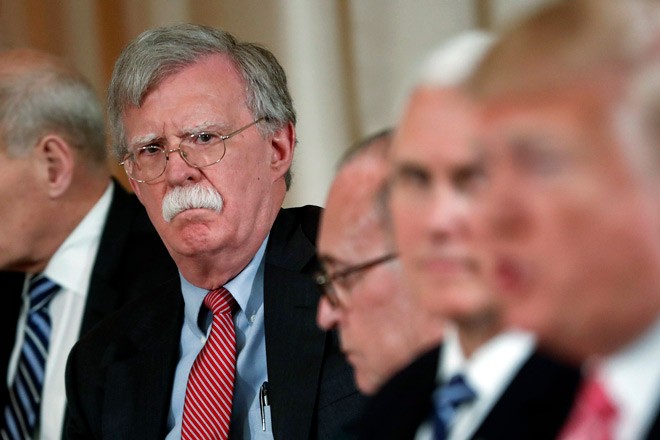 WASHINGTON--Among those unlikely to be mourning John Bolton's departure as U.S. President Donald Trump's national security adviser are officials in North Korea who have denounced him as a "war maniac" and "human scum" for his attempts to end Pyongyang's nuclear program.

In the past, Bolton has proposed using military force to overthrow the ruling Kim family and U.S. officials have said Bolton was responsible for the collapse of Trump and North Korean leader Kim Jong Un's second summit in Vietnam in February.

Trump announced he had fired Bolton a day after North Korea signaled a new willingness to resume stalled denuclearization talks with the United States, but then conducted the latest in a spate of missile launches.

Policy analysts say Bolton's departure could help U.S. efforts to revive the talks but will not make Washington's aim of persuading Pyongyang to give up its nuclear weapons any easier.

"The timing could be convenient for U.S. diplomacy with North Korea," said Leif-Eric Easley, a professor at Seoul’s Ewha University.

"Pyongyang made its disdain for Bolton well known. Kim Jong Un can spin this personnel change in Washington as a win in North Korean domestic politics. That would increase the likelihood of denuclearization talks restarting soon."

Harry Kazianis, a North Korea expert at Washington's Center for the National Interest think tank, said Trump was now free to find a national security adviser opposed to wars of regime change and willing to back a diplomatic track with North Korea.

Indeed, Trump's North Korea envoy, Stephen Biegun, a firm advocate of engagement with Pyongyang, is among the names that have been floated as possible successors to Bolton.

Bolton has not been the only target of North Korean rhetoric.

North Korea's official media has repeatedly denounced U.S. Secretary of State Mike Pompeo and urged Trump to replace him with a "more mature" interlocutor. Last month it called Pompeo a "diehard toxin" who only complicated talks.

Speaking after Bolton's departure, Pompeo said there were "many times" that they had disagreed, but countries should not expect changes in approach.

"Someone asked, would the policy be different absent any individual being here," Pompeo said to reporters at the White House.

"These have been the president’s policies. We give him our best wisdom, we share with him our understanding ... but I don’t think that any leader around the world should make any assumption that because some one of us departs that President Trump’s foreign policy will change in a material way," Pompeo said.

Trump has received plaudits and criticisms for his willingness to engage Kim Jong Un directly in three meetings since June last year, the first between leaders of two countries that have remained in a technical state of hostilities since the 1950-53 Korean War.

Little progress has been made in getting Kim to give up his weapons programs, but Trump has repeatedly pointed to North Korea's freeze in nuclear and long-range missile tests since 2017 as evidence of the success of his efforts.

All that nearly fell apart in Hanoi when Trump followed Bolton's advice and handed Kim a piece of paper that bluntly called for the transfer of Pyongyang's nuclear weapons and bomb fuel to the United States.

The document effectively reprised Bolton's long-held and hard-line "Libya model" of unilateral denuclearization that North Korea has repeatedly rejected and analysts said would have been seen by Kim as insulting and provocative.

While North Korea has said it is willing to resume talks, Kim has given a year-end deadline for Washington to take a new approach.

Regardless of Bolton's departure, Washington has given no indication that it will soften its demand for North Korea's ultimate denuclearization, even though with Bolton gone, the risky all-or-nothing gambit is unlikely to be repeated.