Tamaki to visit U.S. in push to shift base to Guam or Hawaii 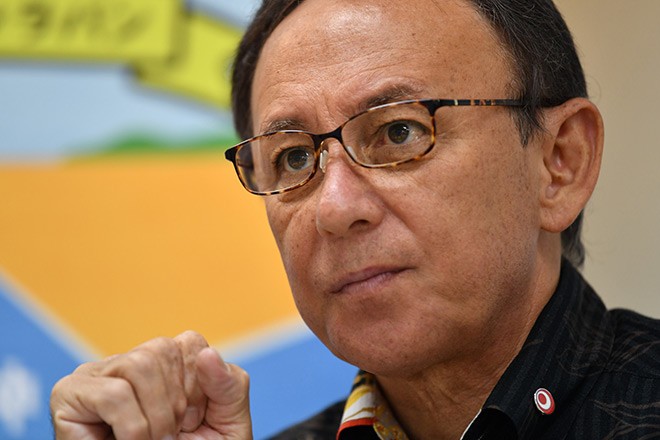 Okinawa Governor Denny Tamaki during an interview with The Asahi Shimbun in Osaka on Sept. 9 (Sayuri Ide)

OSAKA--Okinawa Governor Denny Tamaki will visit the United States as early as next month to lobby for the relocation of a key military base in his prefecture to Guam or Hawaii.

The trip is timely, given that the U.S. Congress is discussing the outline of its fiscal 2020 defense budget centered on the global realignment of U.S. forces.

President Donald Trump has called for a sharp reduction in the U.S. military presence overseas and for U.S. allies to share more of the financial burden in hosting U.S. troops.

A U.S. Senate proposal favors a reduction in the Marine presence in Okinawa Prefecture. It calls on the U.S. government to consider relocating a portion of the operations at the U.S. Marine Corps Air Station Futenma and other bases to Guam or Hawaii.

The Japanese government maintains that the Henoko district of Nago, Okinawa Prefecture, is the only option for relocating the Futenma facility in the city of Ginowan.

Tamaki, who visited Guam in August, said that the governor of Guam and others have welcomed the idea of accepting the U.S. base to promote the economy there.

"Their position is completely opposite to Okinawa, which wants to have the base closed and returned as soon as possible,” he told The Asahi Shimbun in an interview Sept. 9.

Tamaki, who is hoping to attend congressional hearings in Washington, said he will lobby U.S. officials to review the Henoko project and consider relocating the base to Guam or Hawaii.

Under Trump, the United States has been engaged in a dramatic restructuring of its military presence around the world.

Tamaki said he has no detailed information about plans for Japan to host such missiles.

“If the U.S. side delivers such information, protests against the U.S. military are bound to accelerate among residents of Okinawa,” he said.

(This article was written by Masato Tainaka and Kuniichi Tanida.)